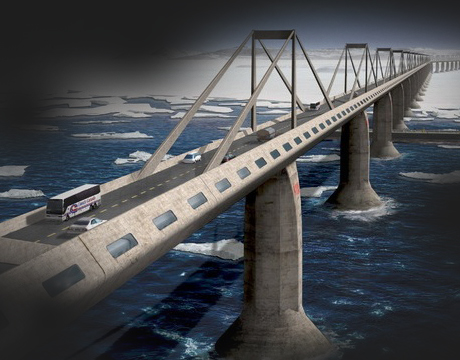 The Bering Strait was last crossed by humans 20,000 years ago during the ice age, when ice formed a bridge between North America and Asia. Today, 47 miles and some of the harshest ocean and arctic conditions separate the two continents.

However, there are many who believe there would be great economical, sociological, and political value in connecting the two land masses by bridge or tunnel. Imagine being able to travel from London to Moscow to Washington, DC, all over land.

However, despite the potential benefits, there have yet to be any serious attempts to put these concepts into reality. The engineering challenges are unprecedented and costs are in the multiple billions of dollars.

The Bering Strait lies just south of the Arctic Circle and is subject to long, dark winters and extreme weather [average winter lows of −20 °C (−4 °F) with extreme lows approaching −50 °C (−58 °F)] and high winds. The strait is also choked with ice flows up to 6 feet thick for nearly eight months out of the year. Many concepts have been proposed for the Bering Strait Bridge, including dedicating a top level to vehicle traffic, opening it to cars and trucks in summer months, and dedicating a middle level to high-speed rail travel.

The region is marked by frequent and sometimes large-magnitude earthquakes. Just south of the strait is the northern edge of the Pacific Ring of Fire, or "Circum-Pacific belt," which generates 90% of the world's earthquakes, according to the U.S. Geological Survey.

Adding to these challenges is the barren desolation on either side of the strait. The nearest town of any size is 100 miles away, requiring thousands of miles of new highways and railways to support the infrastructure and workers for the project.

Connecting the continents with a bridge or tunnel would represent an extraordinary engineering feat. A bridge would trump the world's longest, China's 102.4-mile Danyang-Kunshan Grand Bridge, a viaduct on the Beijing-Shanghai High-Speed Railway. A tunnel would be nearly twice as long as the "Chunnel," the 31-mile-long tunnel that connects England and France. The Discovery Channel's Extreme Engineering Team's concept estimated the cost of the tunnel to be $70 billion.

In addition to the exceptional length, the greatest challenge to bridge design is speeding ice flows, most deadly in the spring when big sheets melt into fast-moving blocks. The supporting bridge piers would need to withstand up to 5,000 tons of pressure or more. Concrete, steel, and other building materials would need to resist radical temperature changes and the wear and tear of seawater and ice. Under these extreme temperature variations, even the smallest crack in the materials could cause corrosion and jeopardize the integrity of the structure.

The late T.Y. Lin, considered one of the world's greatest structural engineers, pioneered the use of prestressed concrete, combining the tensile strength of steel with concrete's resistance to compression. Whereas steel can become brittle and lead to increased fatigue and cracking in a bridge, prestressed concrete would allow the structure to be stronger, more durable, and able to better withstand the forces of nature. In Lin's design, prestressed concrete would encase everything, even the cables. It is believed that the improved structural performance would also help the bridge withstand earthquakes.

In Lin's and other engineering proposals, the bridge would be supported by more than 200 enormous piers. To address the dangers presented by ice flows, each pier would have an aerodynamic shape that would divert ice flows around the pier instead of piling up at its base and putting a potentially destructive amount of lateral stress on the bridge. Below the surface, several proposals envisioned a submerged tube that would rest on the ocean floor. Entrepreneur and master electrician William Simpson has been proposing such ideas since 1995. One such proposal to the U.S. and Russian governments called for a prefabricated tunnel system and a unique quadrail superwide train. Prefabricated tunnel segments would be built above ground during the harsh winter and submerged during the summer thaw. However, a submerged tunnel requires a soft, level ocean floor as a base and the Bering Sea's arctic floor topography is hard and uneven, making it difficult to support this design.

Alternatively, the Interhemispheric Bering Strait Tunnel and Railway Group (IBTRG), a Washington, D.C.-based nonprofit organization, has proposed building a tunnel beneath the ocean floor. Engineers would need to bore through 60 miles of rock and design a fire-safe tunnel, capable of withstanding frequent tremors and an earthquake of 7.9 on the Richter scale. Massive tunnel-boring machines, similar to the ones used in the 35-mile long Gotthard Base Tunnel through the Swiss Alps, would be used to carve out the rock beneath the frigid ocean floor, working from each side of the strait.

In 1994, Lin estimated the cost to build a bridge to be more than $4 billion. More recently, the Discovery Channel's Extreme Engineering team, which submitted its own proposal, estimates the cost of a bridge at $15 billion-$25 billion and the highway, rail, and pipelines at $105 billion, five times the cost of the Channel Tunnel. This excludes the cost of new roads and railways to reach the bridge. The Discovery Channel team also estimated the cost of a tunnel to be $70 billion. Either way, the bridge or tunnel would most likely be the most expensive infrastructure project ever constructed.

To some, the thought of building an overland connection between the two continents via the Bering Strait is a mere romantic pipedream. To others, it is an achievable feat not unlike the accomplishment of landing an astronaut on the moon.

Engineers would need to bore through 60 miles of rock and design a fire-safe tunnel, capable of withstanding frequent tremors and an earthquake of 7.9 on the Richter scale.