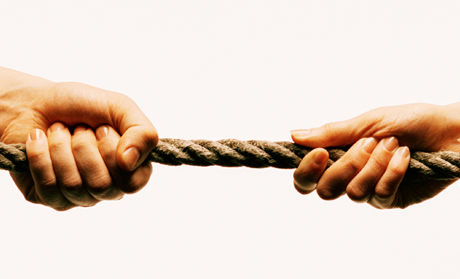 Communication with a Difficult Boss

A difficult boss almost always has a favorite subordinate, and invariably it is not you or me. If you met me, you'd know why it isn't me, but you are still wondering why it isn't you. The favorite is often a useful intermediary. Someone in that role can work for you, without his or his boss's knowledge.

Consider this scenario: The boss's pet informs you that he and the boss plan to shuffle some responsibilities. They will give part of your work responsibilities to a more senior coworker and assign you a less desirable task.

This messenger, mind you, is not your supervisor, but is even with you in the corporate hierarchy. That means your boss had a discussion about your responsibilities not with you, but with someone else whose only connection to the whole affair is that he likes to kiss up.

This may sound far-fetched to my luckier readers, but trust me, I once found myself in just such a situation.

After he dropped his bomb, I stood there thinking, "Who do you think you are?" Well, not in those exact words. Actually, I thought something else, which the editors won't print.

Then a wolfish smile crept over my face, as I realized, with clarity of thought that is rare for me, that I had a maneuver that, oddly enough, would make this situation work to my advantage.

I was talking to a coworker, his favor with the boss notwithstanding, so I looked the boss's pet in the eye and said, in no uncertain tone, that I will not do the extra work and will be happy to take the hit on my annual review for not doing so. The boss's pet was taken aback. The boss and he had laid out this plan, and I should acquiesce.

By rebuffing this individual, what series of events had I set in motion? First, I had disconnected him from the boss. He should not have implied that he and the boss decide things together. He should certainly not have let me know the decision before the boss had informed me.

Invariably, this individual goes and tells the boss what I have said. There should be no fear coursing through your veins, for the simple reason that all but the worst manager knows that you cannot give complete credibility to secondhand information. The individual relaying the information will tell it in a way that was not identical to the original statements. It is getting to be fun now, isn't it?

Occasionally, your manager will be floating an idea to see how it flies. Either way, the boss now knows what your position is and you did not have to tell him in person. There is even an element of plausible deniability to your position. I am sure that the coworker did not even get the manager's intent 100 percent correct.

So, if confronted by your boss, respond with, "Oh, that is what you meant? I did not get that from your minion." Or you can say that, even though when you first heard the idea you were resistant, upon further reflection you realized the value of it. Both you and your boss know that you are waffling, but if this is the greatest compromise you have to make in a year, you are having a better year than I have ever had.

In the best of all worlds, your boss's response should go in the following sequence. First he should look at his confidant and think in disgust or dismay that the fellow has blown it. Second, he moves on to much easier prey. If handled properly, this occurs with minimal if any negative repercussions to you. Now that's communication.

[Adapted from "Talking Back," by Ronald A.L. Rorrer, University of Colorado at Denver, for Mechanical Engineering, August 2006.]

A difficult boss almost always has a favorite subordinate, and invariably it is not you or me.