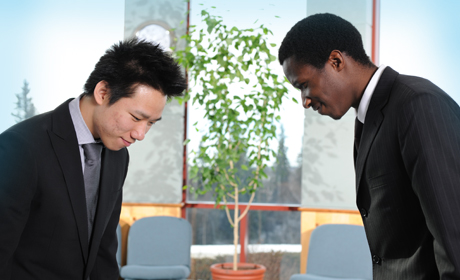 Communicating across cultures is challenging. Each culture has set rules that its members take for granted. Few of us are aware of our own cultural biases because cultural imprinting is begun at a very early age. And while some of a culture's knowledge, rules, beliefs, values, phobias, and anxieties are taught explicitly, most of the information is absorbed subconsciously.

The challenge for multinational communication has never been greater. Worldwide business organizations have discovered that intercultural communication is a subject of importance—not just because of increased globalization, but also because their domestic workforce is growing more and more diverse, ethnically and culturally.

We are all individuals, and no two people belonging to the same culture are guaranteed to respond in exactly the same way. However, generalizations are valid to the extent that they provide clues on what you will most likely encounter when dealing with members of a particular culture.

All international communication is influenced by cultural differences. Even the choice of communication medium can have cultural overtones. The determining factor may not be the degree of industrialization, but rather whether the country falls into a high-context or low-context culture.

High-context cultures (Mediterranean, Slav, Central European, Latin American, African, Arab, Asian, American-Indian) leave much of the message unspecified, to be understood through context, nonverbal cues, and between-the-lines interpretation of what is actually said. By contrast, low-context cultures (most Germanic and English-speaking countries) expect messages to be explicit and specific.

Some cultures think of time sequentially, as a linear commodity to "spend," "save," or "waste." Other cultures view time synchronically, as a constant flow to be experienced in the moment, and as a force that cannot be contained or controlled.

In sequential cultures (like North American, English, German, Swedish, and Dutch), businesspeople give full attention to one agenda item after another.

In synchronic cultures (including South America, southern Europe and Asia) the flow of time is viewed as a sort of circle, with the past, present, and future all interrelated. This viewpoint influences how organizations in those cultures approach deadlines, strategic thinking, investments, developing talent from within, and the concept of "long-term" planning.

Orientation to the past, present, and future is another aspect of time in which cultures differ. Americans believe that the individual can influence the future by personal effort, but since there are too many variables in the distant future, we favor a short-term view. Synchronistic cultures’ context is to understand the present and prepare for the future. Any important relationship is a durable bond that goes back and forward in time, and it is often viewed as grossly disloyal not to favor friends and relatives in business dealings.

In international business practices, reason and emotion both play a role. Which of these dominates depends upon whether we are affective (readily showing emotions) or emotionally neutral in our approach. Members of neutral cultures do not telegraph their feelings, but keep them carefully controlled and subdued. In cultures with high affect, people show their feelings plainly by laughing, smiling, grimacing, scowling, and sometimes crying, shouting, or walking out of the room.

This doesn't mean that people in neutral cultures are cold or unfeeling, but in the course of normal business activities, neutral cultures are more careful to monitor the amount of emotion they display. Emotional reactions were found to be least acceptable in Japan, Indonesia, the U.K., Norway, and the Netherlands and most accepted in Italy, France, the U.S., and Singapore.

Reason and emotion are part of all human communication. When expressing ourselves, we look to others for confirmation of our ideas and feelings. If our approach is highly emotional, we are seeking a direct emotional response: "I feel the same way." If our approach is highly neutral, we want an indirect response: "I agree with your thoughts on this."

It's easy for people from neutral cultures to sympathize with the Dutch manager and his frustration over trying to reason with "that excitable Italian." After all, an idea either works or it doesn't work, and the way to test the validity of an idea is through trial and observation. That just makes sense—doesn't it? Well, not necessarily to the Italian who felt the issue was deeply personal and who viewed any "rational argument" as totally irrelevant!

When it comes to communication, what's proper and correct in one culture may be ineffective or even offensive in another. In reality, no culture is right or wrong, better or worse—just different. In today's global business community, there is no single best approach to communicating with one another. The key to cross-cultural success is to develop an understanding of, and a deep respect for, the differences.

This article is reprinted from the website of the American Management Association at www.amanet.org.