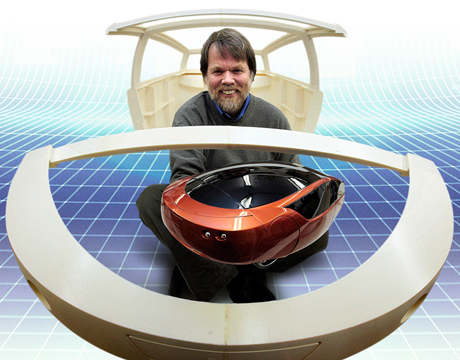 In May of 1903, auto enthusiast Dr. Horatio Jackson, his mechanic Sewall Crocker, and his dog “Bud”, set out from San Francisco to New York City in a Winton car. They completed the first ever cross-country road trip in a motor car in 2 months and 9 days, using 800 gallons of gasoline. In the summer of 2015, teenagers Cody Kor and Tyler Kor, along with their dog “Cupid,” will re-enact Horatio’s drive, taking just 2 days and using 10 gallons of bio-fuel in Urbee 2, the first 3D printed hybrid car.

The two teens are sons of Jim Kor, the president of Winnipeg-based engineering group Kor EcoLogic, and Urbee 2 is the second prototype of Urbee, a self-initiated vehicle research project that he started with his team of designers and engineers in 1996. “We used to work on interest-driven research projects and most of them were focused on energy efficiency because of my personal interest,” says Kor, who believes powering cars on renewable energy is vital to our civilization’s survival. “Urbee has been an offshoot of all those projects.”

Originally designed for the 2010 Automotive X-Prize Competition, Kor’s vision was to build the greenest and most practical car ever made. A mechanical engineer from the University of Manitoba with three decades of experience designing farm machinery, Kor was inspired by Dr. Paul MacCready’s strategy to use all the technology that’s available when solving a problem. “When we thought of designing the greenest car possible, we decided to use whatever we could find. If a fuel-cell would make it more efficient we would use that or a piston engine.”

Kor and his team decided to build Urbee as a gasoline/ethanol hybrid car. It uses electrical energy stored on batteries to power electric motors and chemical energy from ethanol to power the internal combustion engine. At city speeds, the car runs on pure electric and at highway speeds, it uses the ethanol-fueled IC engine. The car is capable of reaching more than 200 mpg and the goal for Urbee 2 is 300 mpg. Its batteries can be charged using a standard wall plug at home or parking lot.

Urbee minimizes the amount of energy required to move forward, through efficient aerodynamics, incorporating three versus four wheels. “We wanted to get the force at the tire on the road as low as possible,” says Kor. The three wheels improve the aerodynamics, explains Kor, highlighting that “the most resistance will be where the tires poke out at the body. We have only three slots where tires poke through and that causes the least resistance.”

From 3D Printer to Road

To make Urbee as sustainable as possible throughout the design and manufacturing processes, the team considered building the prototype body panels using fiberglass, but that would have meant a long and labor-intensive process. Stratasys, their key sponsor, offered to make it using a 3D printer. “We completed the body in clay, scanned it onto the computer, simulated the aerodynamics, and then approached Stratasys to 3D print it,” Kor recalls.

Working with RedEye, an on-demand 3D printing facility, the engineering team at Urbee used ABS plastic and fused deposition modeling to fabricate a light and strong body for the eco-friendly car. Several major body panels were built within weeks.

Kor was awed by the speed of 3D printing, “To have body parts within weeks is pretty fast. The alternate would have been months using fiber glass and we couldn’t make the small parts as we wanted them to be.” According to him, additive manufacturing processes made it easy and efficient to make design changes in the Urbee along the way. “I realized that when you design for a 3D printer alone and not for production processes like casting or extrusion, the processes don’t dictate the design, the parts can be changed and be dramatically better,” says Kor.

After achieving technical success with Urbee in 2013, the Kor Ecologic team initiated the second prototype, Urbee 2, last spring. While the original Urbee only had its exterior 3D printed, Urbee 2 will have its interior 3D printed as well, except the engine and chassis. “Everything you see and touch would be 3D printed – which is almost 50-60% of the car,” says Kor.

On the business side, Kor adds, they have patented certain technology worldwide, so that they could license it other car companies or try to build smaller volumes of the car and sell it in future. “After the second prototype, we would need a pilot-run of 10 or so units, and then an initial production run could be considered. We visualize an inexpensive car – like the Beetle or Model T – for this century.”

Currently, Kor’s team is using crash simulation software to streamline the safety features, and also waiting for more funding to complete the second prototype. “We need a year to design, another year to build and test it. Then my two sons would attempt this cross-country trip in Urbee 2,” he says.

Whether Kor’s sons set a world record by completing the cross-country trip from New York to San Francisco is yet to be seen, but Urbee 2 certainly signals that a future where people build and drive 3D printed cars is on the horizon.

Participate in ASME's Advanced Design & Manufacturing Impact Forum, focusing on the intersection of advanced design and manufacturing in industrial and consumer applications.

Everything you see and touch would be 3D printed – which is almost 50-60% of the car.Jim Kor, President, Kor EcoLogic