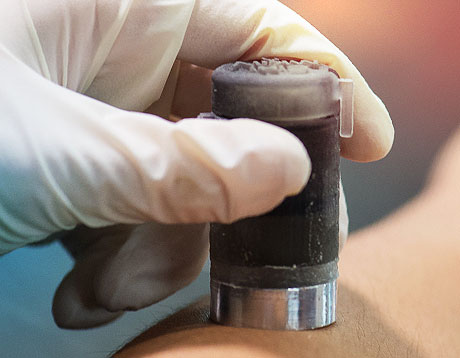 Comfort from the Cold

Three freshman engineers at Rice University who call themselves “Team Comfortably Numb” have been tasked with making a needle puncture much less painful, especially for children. They have come up with the idea of applying the same endothermic reaction used in cold compress packs to numb skin before the needle punctures it.

The device is currently external. The next step is to incor­porate the endothermic device inside the cap of a needle for more convenient use.

The team is made up of computer science major Greg Allison, bioengineering major Andy Zhang, and mechanical engineering major Mike Hua. They currently have a func­tioning prototype that has been shown to produce a measur­able numbing effect in 60 seconds, which in turn reduces the pain from an injection.

The team got started on the project by taking a class called “Introduction to Engineering Design,” taught by Ann Saterbak and Matthew Wettergreen. Students elect to enroll in this class and are placed into interdisciplinary design teams to work on one of the offered projects, which include design for disabilities, enrichment devices for the Houston Zoo, medi­cal devices, and solutions for low-resource settings.

In the course, the student teams learn and apply engineer­ing design to solve a challenge. The teams are also eligible to compete in the annual Rice Engineering Design Showcase. The course lasts for one semester, but students can con­tinue their work when the semester is over.

Team Comfortably Numb was given the project by its sponsor and co-inventor, Mehdi Razavi, a cardiac electro­physiologist at the Texas Heart Institute. The students were asked to design and make a low-cost, easy-to-use numbing system that would be compatible with existing hypodermic syringes.

“Our device is 3D printed and consists of two sealed chambers containing the chemical ammonium nitrate and water,” said Mike Hua, the mechanical engineering major. “A simple twisting motion moves the chambers into alignment to allow the chemicals to flow through the chamber to pro­duce a rapid endothermic reaction. We then numb the skin by contacting the device’s metal surface to the patient’s skin.”

The team has also done further work for both prototype development and testing. For example, they are still working on optimizing the temperature to numb the skin and are also working on miniaturizing the device.

Currently, the team has filed for a provisional patent. The students are thinking of either starting a company around the product to commercialize it or to license their device and idea to a medical device company.

The students are not authorized to actually puncture any­one's skin with a needle. Razavi, their project sponsor, has experience in the area of medical testing. He said the team will need approval from an institutional review board before it can test the product on people.

The bioengineering major, Andy Zhang, said commercial­ization of a product is still a bit down the line for the team, but in mass production the cost of their device will be com­parable to that of a syringe and a needle. They estimate that it will cost roughly $2 if it is mass produced.