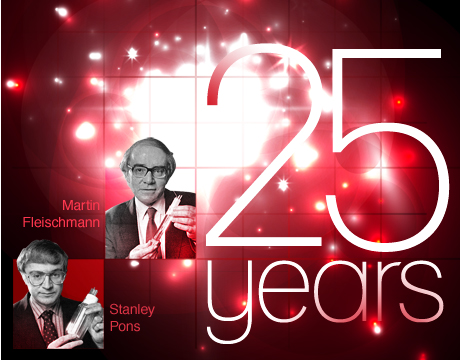 Scientists discover source of clean, unlimited energy! In March 1989, the news rocked the world. Two respected chemists from the University of Utah: Martin Fleischmann and Stanley Pons, told a receptive media they had solved the biggest physics problem of the atomic age. Their compelling claims of room-temperature nuclear fusion in a jar were cast as the solution to the world’s colliding environmental and energy crises.

The meltdown hit just weeks later when the claim was nuked by mainstream scientists who couldn’t reproduce their results and were unsatisfied with the team’s explanations. The cold fusion field has been on ice ever since. Whether considered a scandal, a screw-up, or a scientific character assassination by hot fusion advocates, the cold fusion episode is a case study for those who caution against the “science of wishful thinking.”

On the 25th anniversary of the rise and fall of cold fusion, its close cousin, low-energy nuclear reaction (LENR) science, is still on the fringe but simmering anew. Here’s a look back and a look ahead at a field that always gets a reaction.

The simplicity of the Fleishmann-Pons fusion apparatus added to its news value. Essentially their set-up involved only a cube of palladium metal, a vessel of deuterium-spiked water, and an electrical current. Their purported breakthrough occurred overnight when the unattended device got hot enough to blow up, reducing the palladium to vapor and spewing radioactivity. “It was a nice mess,” Pons would tell the Wall Street Journal. The researchers concluded that only a fusion of the deuterium nuclei in the water could have generated such anomalous heat under ambient temperatures and pressures. Having previously published a number of critical advances in the field of electrochemistry, the duo had more than enough credibility to convince skeptical physicists to take a closer look.

The scientific mainstream did look – and disliked what it saw. From the scientists’ flamboyant media announcement in advance of a peer-reviewed publication, to their omission of elementary experimental control measures, to their perceived evasiveness when the questions began to fly, they lost the public relations war well before their scientific case unraveled. In the end, labs that had initially corroborated their results recanted and several more failed to reproduce the phenomenon. Their work written off as either a goof or a grift, Pons and Fleischmann were shunned, and “cold” became an unutterable four-letter word in fusion research.

The science that turned heads in the 1980s as an energy panacea had obliterated an entire Pacific island 35 years earlier in the world’s first thermonuclear weapons test. After fission bombs leveled two Japanese cities in 1945, the nuclear community split over the relentless quest for a “Superbomb” that would give the U.S. a permanent upper hand in the coming Atomic Age. Manhattan Project and Atomic Energy Commission head J. Robert Oppenheimer was no flower child, but he was leery of taking nuclear weapons to this new, potentially calamitous level. His colleague-turned-critic Edward Teller, however, was convinced a thermonuclear (hydrogen) bomb was necessary to deter Soviet aggression. He converted the new Lawrence Livermore National Laboratory into an incubator for the H-bomb age. But as the clouds of the Cold War gathered, so did the interest in the idea of taming fusion energy for practical, peaceful production of nuclear power.

It took the father of the cathode ray television, inventor Philo T. Farnsworth, to ready fusion power for prime time. As a subsidiary of ITT Corporation, the Farnsworth Television Laboratory built the first prototype of a device he called the fusor in 1959.Using inertial electrostatic confinement to create a small-scale fusion reaction, the fusor was one of the most reliable producers of a fusion reaction available during the 1960s. ITT cut off its funding before the original fusor approach could be adapted for practical power production, but it found useful in commercial applications in aerospace and medical research.

Farnsworth’s work also inspired new generations of fusion do-it-yourselfers like Jamie Edwards, a 13-year-old Briton who recently became the world’s youngest bottler of the sun’s limitless power. On a larger scale, projects like the multinational ITER program and the National Ignition Facility at Lawrence Livermore represent major investments in a new understanding of fusion, and new experimental approaches using powerful lasers, magnets, and other sophisticated tools to produce anomalous heat.

And at the grassroots level, a small but passionate community of researchers across the world is determined to crack the cold fusion case, honor Farnsworth’s innovative spirit, and even rehabilitate Pons and Fleishmann’s reputations.

In a 2012 documentary film, The Believers, director-producers Monica Long Ross and Clayton Brown put a human face on the cold fusion brouhaha through interviews with key players in the debate, notably Fleishmann himself, and today’s activist “believers” who see the technology as mankind’s salvation. The film took the Gold Hugo award for best documentary at the Chicago International Film Festival.

The Martin Fleishmann Memorial Project is an effort by believers to honor Fleishmann, who died in 2012, by promoting widespread replication and publication of contemporary low-energy fusion reaction experiments by reputable researchers. They have redubbed the technology the New Fire, and use their web site to swap news and documents, including 3D CAD plans for replicas of key reactor components.

A bottomless supply of power makes perfect sense to a world coming to grips with climate change, nuclear safety issues, the arms race, and addiction to foreign energy imports. The promise of capturing a star in a jar will keep the debate going, and temperatures rising, for a long time to come.

For Further Discussion
It took the father of the cathode ray television, inventor Philo T. Farnsworth, to ready fusion power for prime time.