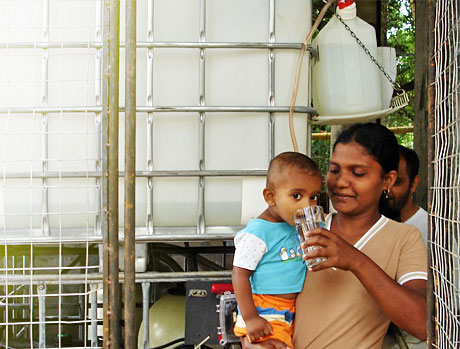 A four-year effort to bring water and sanitation to some 350,000 people in a remote district of Honduras is wrapping up, and medical tests show the $4.7-million effort has dramatically reduced the incidence of water-borne illnesses and parasites.

Project SafeWater Colon includes the design and construction of 229 projects to bring water and sanitation to the Honduran District of Colon, including construction of some 15,000 latrines. George Green IV, vice president of Water Missions International (WMI), a nonprofit, faith-based engineering organization that managed the project, says virtually everyone in the poverty-stricken district now has access to clean water and sanitation.

That wasn't the situation in 2006 when the Pentair Foundation donated $4.7 million to provide basic services through Project SafeWater. At that time, the Honduran government reported 34% of the district's people lacked access to safe drinking water and 43% lacked proper sanitation. Independent testing found those numbers dramatically low, reporting that 100% of the Colon's population lacked a source of clean drinking water. Virtually every water source had high counts of coliform bacteria, indicating fecal contamination.

Working with Pentair, WMI utilized its Living Water Treatment System, a safe drinking water package that uses filtration and chemical disinfection to produce clean drinking water. It operates on solar energy, and produces 1,000 gallons of water for less than 75 cents, says Green IV. The system's filters are designed to be back-washed, eliminating replacement costs, and chlorine for disinfection is commonly available and reasonably priced, he says.

To keep the systems sustainable beyond Pentair's donation, WMI also introduced a microenterprise business model, where the local community obtains ownership of the system and users pay a nominal price for potable water. The fee is established by the community. Once operating, WMI says the system costs pennies per person per day to operate.

Ensuring success required WMI to conduct a series of educational programs throughout Colon to heighten awareness of the connection between good hygiene practices, health, and the importance of safe, clean drinking water. "It's been a huge project," says Green IV.

"Everyone understands that people need clean, safe water to live. The issue becomes proving that a viable, sustainable and cost-effective solution can be provided where it's desperately needed, and we have done that," says Randall J. Hogan, chairman and chief executive officer of Pentair. "The results of the Project Safewater-Colon study show that for an investment of only pennies a day per person, we can ensure that people have access to safe drinking water in regions where they don't have it now."

WMI, which operates in eight countries around the globe, increased its in-country staff to 20 employees to handle the project. They went into the villages and, in what perhaps became the program's biggest effort, improved on the design of local outhouses and latrines and installed upward of 15,000 toilets throughout the region.

"We developed a prototype design," says Green IV. "We build a robust and durable structure."

The district's latrines were of the type seen everywhere: a pit fitted with a wooden bench and seat. A typical structure of wood, sticks and palm fronds provides privacy.

WMI's solution, called the "Healthy Latrine," still is basically a pit-type latrine but uses a standard flush toilet, without the tank, making it cleaner and healthier than a standard pit design. It is built outside the house of a family, using a stone-lined 8-foot-deep pit covered by a 4-inch-thick, 4.5-ft x 4.5-ft poured concrete slab and a 2-inch floor slab. The toilet is fixed with a 3-inch PVC waste pipe and a smaller diameter PVC pipe provides venting. The waste pipe connecting the toilet to the pit is 5 feet long and fitted with a tee or 90° elbow at the pit to prevent waste from directly hitting the pit walls.

The structure is made from fiber-reinforced concrete and the walls have windows for ventilation.

Green IV says WMI simply was not impressed with the government's standard latrine design, which called for a concrete block structure but cost $400 to build.

"Being engineers, we love a challenge," says Green IV. "So we came up with the idea of making a mold."

WMI supplies families with aluminum molds fitted together to make a form for the structure. After cleaning and lubricating with vegetable oil, family members erect the form, mix concrete and pour the mix into the frame. The concrete must cure for about 20 hours before the frame can be broken apart and used for the next latrine.

WMI says the structure should last for about 30 years and can accommodate "expansion." "We wanted something to last and we wanted to bring the cost down," says Green IV. The WMI design knocked costs down by half from the government's design, he says. "They were shocked that we'd be able to build a latrine for $200," he adds.

The design improves sanitation simply because it incorporates a toilet that, despite not having any running water, flushes. As part of the sanitation education program, family members are taught to bring a bucket of clean water into the latrine, wash their hands after use, and then flush the toilet with water poured from the bucket.

The project has been an overwhelming success based studies done in 2010 after some 10,000 new latrines had been built. The work showed an 80% improvement in the number of people tested for parasites and a 50% decline in the number of diarrhea disease cases reported to local health clinics.

WMI also is using its latrine design in Peru and Haiti.

We wanted something to last and we wanted to bring the cost down. They were shocked that we'd be able to build a latrine for $200.George Green IV, VP, Water Missions International