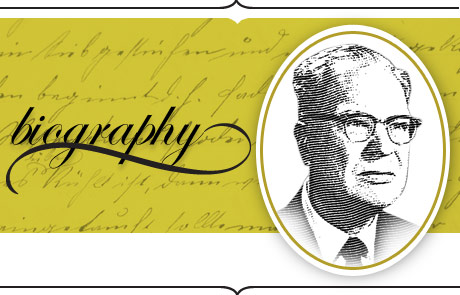 When he was growing up, Chester F. Carlson dreamed of making inventions that would help him escape a life of poverty and change the world. Born in 1906 in Seattle, WA, he spent a disadvantaged childhood living with his sickly parents. He worked before and after school hours to help support his family; by the time he was in high school he was the main provider. When he was 17, his mother died from tuberculosis and his father was crippled with arthritis.

Throughout his adolescence, Carlson was intrigued by science, chemistry, engineering, and graphic arts. He studied the lives of inventors. His favorite possessions as a boy were a rubber stamp set and a typewriter.

"The idea of making an invention appealed to me as one of the few available means to accomplish a change in one's economic status, while at the same time bringing to focus my interest in technical things and making it possible to make a contribution to society as well," he wrote many years later.

After high school, Carlson enrolled at the California Institute of Technology, where he was a solid but not spectacular student, graduating with a degree in physics in 1930—at the onset of the Great Depression. Jobs were scarce. After applying to 82 companies, he took a low-paying job as a research engineer at Bell Telephone Laboratories in New York City.

Carlson quickly became bored and transferred a year later to the patent department, where he assisted the company's attorneys. Here his creativity began to take hold and he recorded hundreds of ideas for new inventions in his personal notebooks. After being laid off in 1933, he found a job with PR. Mallory & Company, an electronics firm. At night, he studied law and earned a law degree from the New York Law School; later he was promoted to manager of Mallory's patent department. Here he quickly realized how much time was wasted in the department because there were not enough carbon copies for the patent paperwork; if more copies were needed, documents had to be retyped and proofed again. Carlson decided to invent a copying machine that would make a copy of an existing document with the push of a button.

Carlson was especially inspired by the research of Hungarian physicist Pál Selényi, a leader in the little-known field of photoconductivity and electrostatic images, whereby an image could be formed on a specially coated, electrically charged plate through the application of light. Carlson conducted many experiments at home in his kitchen, some of which caught fire and filled the room with smoke.

From 1939 to 1944, he sought funding from about two dozen companies, all of which turned him down, including IBM. Carlson was even rejected by the National Inventors Council. Despite these setbacks, in 1942 the U.S. Patent Office issued Carlson a patent for his electrophotographic device.

Much of the early work was funded by the U.S. Army. The first version—the XeroX Model A—was shipped in 1949. Reviews were subdued because the machine was difficult to use and required 39 steps to make a copy. Several better versions were released over the next 10 years, culminating with the Xerox 914, the first "modern" photocopier. The 914 fulfilled Carlson's dream of building a machine that, with the simple push of a button, delivered a perfect copy on plain paper.

Huge success followed. In 1961, Haloid Photographic Company changed its name to Xerox Corporation. Although Carlson became one of the wealthiest men in America, he never forgot his impoverished roots and donated over $150 million to charitable causes and actively supported the NAACP. He developed a keen interest in Hinduism and Buddhism and frequently hosted group meditations in his home. Carlson died of a heart attack in New York City at the age of 62. In 1981, he was inducted into the National Inventors Hall of Fame. His groundbreaking invention transformed the way business is conducted around the world and is the cornerstone of today's multibillion-dollar photocopying industry and newer light-based copy machines, such as the laser printer.

The 914 fulfilled Carlson’s dream of building a machine that, with the simple push of a button, delivered a perfect copy on plain paper. Article
Workforce Blog: Prioritizing Diversity and Inclusion
Nicole Flowers from Accenture highlights the importance of not only hiring BIPOC but also investing in their future training.