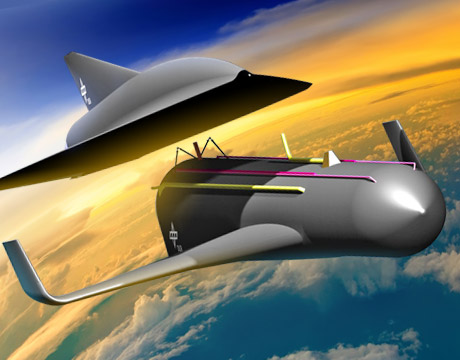 The SpaceLiner is a visionary concept for a suborbital, hypersonic, winged passenger transport. Aircraft image: DLR

Hypersonic flight is coming. There are multiple designs in the works for vehicles meant to cross the skies at more than five times the speed of sound. These sleek, futuristic planes could reduce a trip from London to Sydney to four hours—or eleven minutes, depending on what you’re willing to believe—making the Concorde look like a horse and buggy.

But achieving routine speeds over Mach 5 is only one part of the problem. Creating a shell that will survive those speeds is another. Temperatures at the surface of aircraft moving that fast can reach 3000 degrees Celsius, enough to destroy almost any material currently used in flight.

Now researchers at the University of Manchester have created something that will leave hypersonic nose cones and leading edges intact. It’s an ultra-high temperature ceramic, or a UHTC, mated with a carbon-carbon composite.

On their own, carbon-carbon composites are pretty tough, with sufficiently high melting points. But they can’t survive the oxidization that occurs at such speeds. UHTCs are also incredibly hard, used primarily in tool bits for cutting tools, but they’re incredibly brittle as well. If you coat a vehicle with the stuff and then punch through the atmosphere at Mach 5, it will crack and peel right off.

Put them together, however, and these problems evaporate. The only question is how. Ceramics are typically made into a powder, which is then pressed into a mold. “This coating can fall off easily,” says Ping Xiao, a professor of materials science at the university, who led the research. “What we did was use liquid metals—zirconium and titanium—to infiltrate the carbon-carbon composite.”

The carbon-carbon composite is porous, so the UHTC infiltrates the fibers and the two materials become integrated. The result is a coating that is likely to survive the extreme conditions of hypersonic flight.

The technique has other advantages in addition to the hardiness of the product. To keep them from becoming too brittle, the geometry of the molds used with ceramics in a powder form have to be kept fairly simple. With Xiao’s method, the coating can be as complex as needed.

The depth of the ceramic infiltration can be anywhere between one and two hundred microns, adjusted to meet the needs of the specific application. More important, perhaps, is the low cost of production. “This process is potentially cheaper than using powder, because we are not using any mold to press a component,” says Xiao. “And we are not using anything exotic, from my point of view.”

The potential applications go well beyond hypersonic flight. The new material could be used to extend the life of the nozzle throats and diffusers in reusable rockets or to coat the contact points for re-entry vehicles. The gas turbine, nuclear, and defense industries would have multiple uses for such a material.

But there’s work to be done before then. “This is our fist step. We definitely need further research and development for this to become a product,” says Xiao. “We didn’t fire a rocket yet.”