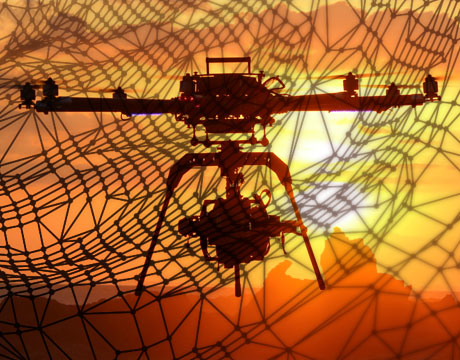 We have heard our share of buzz words in the last few years. But drone is near the top.

And to be honest, they can be a great deal of fun. Taking wondrous picturesque nature shots that might require being an expert mountain climber otherwise. Or just cutting through the air as one more toy for aeronautic appreciation.

But while it may be a hobby for some, in the wrong hands, a drone has the potential to do harm, says Mo Rastgaar, associate professor of mechanical engineering at Michigan Technological University. “I was watching the World Cup and there was mention of snipers,” he says. “I thought, ‘What if someone meaning harm has a drone come into a stadium to hurt people and bullets wouldn’t help?’ Through brainstorming, the thought of shooting nets from other drones to catch potential rogue drones seemed like a good way to go.”

A purchase was made of an off-the-shelf helicopter (a drone), and it was modified with a net gun. “The guns are used for catching birds and my team geared up a control system where you could shoot them using a remote control,” he explains.

This “drone catcher” has a vision system as well and, when it’s felt to be the right moment, you shoot and the net is launched. The net itself has bullets attached, so when the bullets are shot, it carries the nets with them.” But it doesn’t require anything close to a perfect shot, Rastgaar adds. “Even just catching one of the four propellers with the net should be enough to do the job,” he says.

The launcher itself is powered by pressurized CO2.

“When the net ‘catches’ the target drone, it stays in possession of it and can carry it where you want,” he says. “We don’t want to just force it to land somewhere if it’s carrying explosives. If you put it on the ground, just think of the chances of it exploding anyway. So you want to carry it to somewhere you can neutralize it.”

The control system has a visual feedback setup. “A controller system gets information from a detection system and moves the drone catcher to the neighborhood of the target drone,” he says. “We are working on the control system now and we will have visual servo to aim the net launcher and engage.”

The vision system is a stereo camera and sends feedback to the controller, he says, adding that, at present, the launcher’s optimal target distance for capture is about 20 feet.

“The thought is it could one day maybe be used by law enforcement agencies and private security companies,” he says. “It’s not for the civil population when you consider FAA laws. But you want the public to be safe and hopefully this can be a way to help.”

For Further Discussion
The thought is it could one day maybe be used by law enforcement agencies and private security companies.Prof. Mo Rastgaar, Michigan Technological University