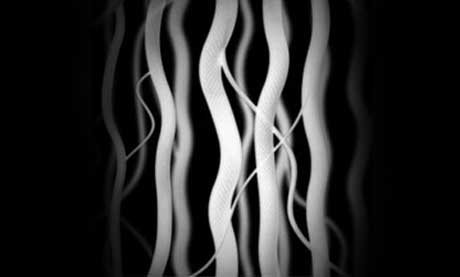 Ever since carbon nanotubes were discovered in 1991, they have sparked intense speculation about their potential applications. Materials scientists have long known that carbon-based molecules can possess extreme properties—after all, diamonds are pure carbon. But common forms of carbon, such as graphite, are soft rather than strong.

At the molecular level, the difference between graphite and carbon nanotubes is similar to that between sheet metal and steel tubing of the same gauge. Thanks to their tubular structure, carbon nanotubes have a measured strength about 50 times that of carbon steel. And because of differences in the way the familiar chicken-wire patterns of carbon atoms line up across the surface, nanotubes can either act as metals (potentially conducting greater current densities than copper) or semiconductors.

Using carbon nanotubes to make stronger ceramics, lighter car bodies, or other materials applications could have enormous impact on day-to-day life, similar to the way plastics changed the world in the mid-20th century.

In 2000, Phillippe Poulin of the Paul Pascal Research Center in Pessac, France, developed a technique for extruding a fiber from a soup of carbon nanotubes. As the liquid flowed, the nanotubes aligned themselves along the direction of the flow. When dried, the resulting fibers were flexible, but not very strong.

In 2003, Ray H. Baughman of the University of Texas spun strong threads made of carbon nanotubes and polyvinyl alcohol; the threads were extruded and spun into fibers as thin as a human hair and hundreds of feet long. Tests showed the threads were 17 times stronger than Kevlar and about four times tougher than spider silk, suggesting some potential applications that rely on high strength—cables and protective clothing. Moreover, the nanotube superthreads could conduct and hold electrical charges, suggesting that electronic devices could be directly incorporated into fabrics made of them.

Just one problem: the process of making the superthreads was slow.

In 2006, Baughman's team discovered a new process that had less in common with spinning yarn than it did with yanking a Band-Aid from a hairy arm. Baughman's group started by growing a carpet of nanotubes on a metallic substrate. The nanotubes, each about 10 nanometers in diameter and 300 micrometers long, grown vertically on the substrate, can pack as closely as one trillion per square inch.

In an intuitive leap, Baughman's group, in collaboration with Ken Atkinson, a textile expert at Australia's Commonwealth Scientific and Industrial Research Organization (CSIRO) in Belmont, found a way to make a ribbon of nanotubes in a single motion. A thin ribbon of aerogel unspools across the top of the carpet of nanotubes. Where the aerogel and the nanotubes meet, tubes catch on the aerogel and are pulled from the substrate. Thanks to the close packing of the tubes and to an attractive force operating at the molecular level, a nanotube breaking away from its base will pull away other tubes. Quickly, most of the nanotubes find themselves realigned longitudinally along the surface of the ribbon.

Moreover, the process is rapid: Baughman's group could produce up to 20 feet of nanotube ribbon per minute.

Baughman's team then layered several ribbons atop one another in a crosswise pattern and dissolved the aerogel substrate, leaving a membrane or thin sheet of nanotubes held together by atomic forces. The sheet was strong: laboratory tests showed across its plane, a sheet could support 50,000 times its own weight—making it stronger pound for pound than a steel sheet of the same dimensions.

Moreover, the pure carbon membrane was not only flexible, but an electrical conductor. A swatch of the fabric placed between two electrodes glowed incandescently when a current was applied.

The extraordinary strength and lightness of the nanotube sheets suggest they could find use in high-end applications such as military aircraft or motor sports. Also, because the conductive sheets are so thin that they're nearly transparent when sandwiched between two sheets of plexiglass, they could be incorporated into automobile windshields as antennas or heating elements, or could find a home in photovoltaic cells or in artificial muscles.

But the limiting factor is still cost: carbon nanotubes are about $1,000 per pound or more, although newer production techniques could bring down the costs under $50 per pound. Although that's a lot for an industrial material, the nanotube supersheets don't require a lot of carbon: "You could cover an acre with a sheet that weighs only four ounces," Baughman said.