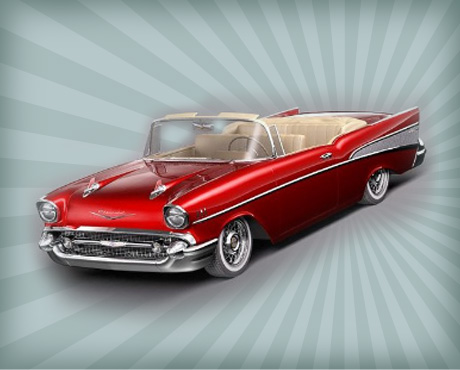 The connection between engineers and old-time classic motorcars can be as tight as a rusty lug nut. Engineers have been crazy about automobiles since Siegfried Marcus got the idea to bolt a two-stroke engine onto a horse cart in the 1860s. Vintage cars from the early-to-mid twentieth century hold special fascination for gearheads, reflecting the perfect balance of beautiful design, mechanical performance, and practical utility.

Some engineers incorporate their auto lust into their daily working lives. Others simply have great cars handed to them. And, as often happens with devoted hobbyists, some have taken things a bit too far. Here are a few examples.

With his Ph.D. in mechanical engineering, a healthy dose of real-world auto industry experience, and a personal passion for racing, Chris Gerdes has what most engineer-car buffs would agree is the coolest job in the world. He would probably agree as well. Gerdes heads the Center for Automotive Research at Stanford (CARS), Stanford University, and co-directs Stanford's REVS program, a multidisciplinary center created to "connect the past, present, and future of the automobile." He also gets to drive some of the coolest old cars ever made.

One of Gerdes' research specialties is the psychophysiology of driving: what goes on in a driver's mind and body while operating a car. But he's not trying to help people drive better. He builds cars that drive themselves. Gerdes and other REVS-member faculty are studying the mechanical and human factors behind some of the top-performing cars in history as part of a broader autonomous vehicle design initiative at Stanford. With access to rare cars from the collection of philanthropist and REVS program founder Miles Collier, they put vintage hot rods and top-notch professional drivers to the test in real-world track conditions, using sensors, accelerometers, GPS, and gyroscopes to gather data that will make driverless cars smarter and safer.

Just as important as the data collected from the car is the information that data comes from the drivers' brains, especially when it belongs to a real pro energized by the chance to race cars like a rare 1960 Porche 356B Carrera Abarth GTL. Gerdes' team records the drivers' brainwaves and vital statistics during a race to capture and duplicate their expertise and decision-making skills in algorithms that make tomorrow's driverless cars safer and adaptable to changing conditions.

"The objective isn't to create robotic racing, but to study racing as a way of getting insight into obstacle avoidance and other challenges the car sees in everyday driving," Gerdes said. But why not use a new Prius instead of an old Porsche? "Because life is too short to drive a boring car," he said.

NASA's daring Mercury astronauts were some of the first engineers and technology professionals to earn the undisputed status of "cool." Chevrolet exploited this by putting early space travelers behind the wheel of the company's coolest muscle car, the sleek and powerful Corvette. After all, you can't expect a guy used to driving a Saturn V rocket to be seen behind the wheel of a DeSoto.

Late engineer and lunar pioneer Neil Armstrong had his blue 1967 Corvette coupe for only a short time before selling it to a private party who worked at the local dealership near Cape Kennedy. The 'Vette spent the past several decades undriven and decomposing until Florida collector Joe Crosby purchased it in February 2012. Although he recently drew bids exceeding $250,000 in an eBay auction, Crosby reportedly still has the car and is restoring it while he waits for an offer he likes better.

Experts say an "ordinary" model in similar condition would be worth around $20,000, but Armstrong's name on the pink slip ups the collectability factor considerably, especially in light of his recent passing. It's another example of the value-added effect when engineers and classic cars get together.

The extreme example of the engineering-classic car romance gone too far is the case of Alexander Kennedy ("A.K.") Miller. Born to a wealthy New Jersey family in 1906, A.K. landed a scholarship to study mechanical engineering at Rutgers University. But his career veered almost immediately from promising engineer to eccentric tinkerer, hoarder, and recluse. During his lifetime, neighbors living near Miller's remote and run-down Vermont farm assumed he was destitute. But not long after his death in 1993, when tax collectors were combing through his assets, they found his astonishing secret: some four-dozen rare gems of automotive history from the early twentieth Century.

Perched on blocks in a series of falling-apart outbuildings scattered over his property was a stash of four dozen rare and luxurious cars including some 30 Stutz automobiles: Blackhawks, Bulldogs, and Bearcats. Others included a Stanley Steamer, a Locomobile, a 1926 Rolls Royce Silver Ghost, and other makes that cause collectors' hearts to palpitate. Most were in their original condition, although much the worse for decades of neglect and improper storage. In 1996, the hidden trove was auctioned on-site by Christie's Auction House of New York for nearly $2 million.

Despite his reclusive ways, A.K. did have to interact with the outside world when buying or selling his cars. Clients interested in his huge collection of original Stutz replacement parts had to settle for purchasing reproductions that the once-promising engineer fabricated himself out of scrap metal rather than give up one of his precious originals.

Whether we own them, study them, or simply fantasize about driving them, classic cars keep our engineering brains firing on all cylinders.

Why not use a Prius instead of a 1960 Porche? Because life is too short to drive a boring car.Chris Gerdes, Center for Automotive Research at Stanford, Stanford University