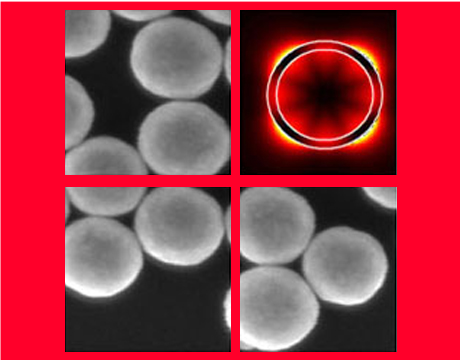 Image showing nanoparticles that have been injected into the body and being adsorbed by a cancerous tumor which is then burned away. Image: Naomi Halas / Rice University

More than 10 years since two Rice University professors developed a potential treatment for cancer using gold nanoshells that circumvents invasive surgery and toxic drugs, the therapy appears to be on track for Food & Drug Administration approval as a medical device next year.

“It’s been a long process,” says John Stroh, CEO of Houston-based Nanospectra Biosciences, a company founded by professors Dr. Naomi Halas and Dr. Jennifer West to commercialize the therapy. Stroh says he expects Nanospectra to be the second company to get approval for tumor ablation using nanoparticles. In 2010, Berlin, Germany-based MagForce Nanotechnologies was the first company worldwide to receive European regulatory approval for its procedure using nanoparticles, small bits of iron oxide suspended in a liquid. European approval for the Nanospectra therapy is expected later this year, he says.

Gold nanoshells were invented in the 1990s by Halas, head of Rice’s Laboratory for Nanophotonics and professor of biomedical engineering as well as other areas. The nanoshells are tiny layers of glass formed into a sphere encased in a thin layer of gold. Each is about 20 times smaller than a red blood cell.

Collaborating with West, the Isabel C. Cameron Professor of Bioengineering at Rice, Halas worked with the nanoshells so that they would absorb light. Then they injected nanoshells into mice with cancer and found that the nanoparticles accumulated around the tumor. When they next pointed a laser at the particles, and the light was converted into energy and heated the cancer cells. Those cells died, eliminating the tumor and leaving no damage to surrounding cells.

The technology was licensed to Nanospectra Biosciences, Inc., Houston, TX, in 2002, which has conducted animal and human testing required for regulatory approval. The particle used by Nanospectra, which it has named Auroshell, is the silica core surrounded by a thin layer of gold. Since the Aurolase therapy is a physical process, it is classified by the FDA as a medical device (in contrast to a drug), which typically takes less approval time.

The nanoshells are placed in the bloodstream of a patient with a cancerous tumor, and because of the leaky characteristics of a tumor’s blood vessels, the nanoparticles accumulate in the tumor and frame it. Subsequent exposure to a near-infrared laser generates heat and bursts the cancer cells’ walls. The light is harmless, and because the heating is localized, it affects only cells immediately adjacent to the nanoshells, and destroys cancerous cells without harming healthy surrounding tissue. The nanoshells eventually are eliminated safely from the body.

Stroh says Nanospectra has completed or is in the process of doing clinical trials for head and neck cancer, lung cancer, and prostate cancer. Human testing began in 2008 and has been conducted in a number of hospitals including The University of Texas Health Science Center at San Antonio; The University of Texas Southwestern Medical Center in Dallas; and Baylor College of Medicine, and collaborative research has been done with MD Anderson.

The therapy is so much less traumatic than surgery; there is less recovery time, less hospital time, and there are no drugs, explains Stroh. “You are getting the entire tumor because the gold frames the margins.”

The medical community is optimistic about the prospect for other medical applications of nanoparticles as well. For instance, they could be used as a diagnostic tool for cancer. A patient would be injected with nanoshells and a near-infrared light passed over the body, which would indicate the location, size, and shape of early cancers. They can also be viewed with various conventional body scans.

Nanoshells could also be the delivery system for various drugs that would be targeted to a specific area, eliminating side effects that often result from systemic use. If chemotherapy is recommended for treating tumors, the drugs could be delivered directly to the tumors by the nanoshells and when activated either by a laser or some other means would release the drugs.

“There is a lot of promise,” Stroh says. “I’m not going to say [the procedure] is going to cure all cancers, but certainly it’s expected to offer a lot of benefits [of being] non-toxic [and less invasive] than surgery. It has the potential of reducing lots of surgeries.”

The therapy is so much less traumatic than surgery; there is less recovery time, less hospital time, and there are no drugs.John Stroh, CEO, Nanospectra Biosciences