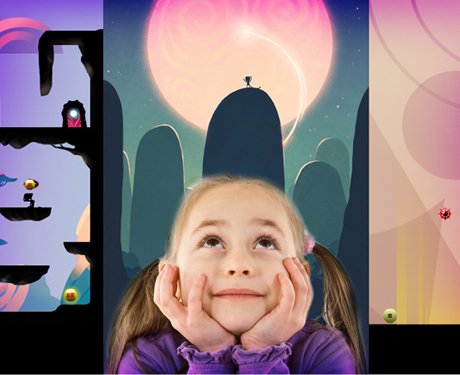 An explosion in his laboratory has shrunk Harold to nanoscale and flung him to the ceiling. As Harold journeys through strange new worlds, his lab partner, Nikki, helps him to understand nanoscale forces to get back to full size. Harold must find all the pages of his notebook and all the parts of the broken shrinking machine but first he must stop a tiny alien race, the Nanoids, who have been stealing his technology.

This might sound like a plot of a science-fiction film, but it is the storyline for Geckoman, an online video game developed by Northeastern University researchers at the Center for High-Rate Nanomanufacturing (CHN), with funding from the National Science Foundation and 15 Days LLC, a company founded by Northeastern alumni and faculty.

“Geckoman teaches the basics of nanotechnology to middle-school students. There are different worlds in the game and each one introduces a new force to the student. The kids can’t go from one level to another without learning some principles. They have fun and learn at every level,” says CHN director Ahmed Busnaina. The William Lincoln Smith Professor of mechanical and industrial engineering at Northeastern has been teaching undergraduate students for over 27 years now and believes that “if done correctly, gaming can be a very powerful teaching tool.”

Game-based learning has been riding a wave of popularity in schools and colleges in recent years. For instance, mechanical engineering undergraduates at Northern Illinois University learn principles of computation and simulation by playing a cars-theme video game. Shortfall, another game developed at Northeastern, teaches students how to run a manufacturing business by balancing suppliers, negotiating contracts, and reviewing sustainability factors—all in a virtual environment. Foldit, developed at the University of Washington's Center for Game Science, challenges players to learn about the shapes of proteins and compete online to fold them into the most efficient shapes. Quest to Learn, a middle school in Manhattan, extensively uses games for teaching.

While educational institutions are considering implementing video games in learning, parents are being cautious about the excess screen time children spend strategizing how to beat the next level of World of Warcraft. So are video games turning children into zombies or can they really be used as an education tool?

“It is not about what games do, but what they can and would do,” says Eric Klopfer, associate professor of education at Massachusetts Institute of Technology (MIT) and director of the MIT Scheller Teacher Education Program (STEP). “There are certain facts about science that engineers should know but those facts have much more meaning when you use them to solve problems. Video games challenge players with difficult problems and motivate the players to solve problems,” he says.

Video games can enable STEM education from elementary school all the way through college as they teach skills such as analytical thinking, multitasking, strategizing, problem-solving, and team building. “Traditional learning has provided superficial learning through text books. Games are best at teaching a deeper level of learning,” says Klopfer. His team at MIT builds and design games in life sciences and math for younger kids. They have built several physics-based games, such as Woosh and Waker, in conjunction with the GAMBIT game lab on campus. “Our latest initiative is a project, MMOG, a multiplayer online game in collaboration with Gates foundation to teach high-school biology and math,” he informs.

Busnania says that students have a preference to learn through game play over conventional lecturers and the results of student play tests conducted for Geckoman indicate that they are learning new concepts. The Donahue Institute at the University of Massachusetts did a preliminary evaluation of the game. Three groups of students who played Geckoman were asked to complete content-specific pre-tests before they played the game and post-tests after playing the game. The difference between pre- and post-tests showed that the game was successful in helping students learn the science concepts presented in it.

Video games represent the kind of interactive and self-paced learning that people see as a future guided by technology. Klopfer says, however, games can’t replace traditional teaching methods. “I don’t think games should be the only component. Games do provide students the opportunity for self-learning but students need guidance and mentorship. The role of the teacher here is not diminished but becomes more challenging and interesting in helping the students to learn with this kind of medium,” he explains.

According to Klopfer, games are being used more in basic sciences than engineering right now, so there’s still opportunity in developing games to teach engineering concepts. A promising new frontier lies in using games-based learning to better prepare students for careers in STEM-related fields. This interactive and entertaining learning, or “edutainment,” could just be a beginning of the trend.