Can Engineering Change Our Climate for the Better? Part 2

Part One of "Can Engineering Change Our Climate for the Better?" introduced you to new areas of climate engineering. Here are some additional methods.

These methods are being considered to reduce the amount of solar radiation impacting the planet. Developments in this field are limited to computer modeling or laboratory tests. Testing in the field has been met with strong resistance because of unknown impacts. Key solar radiation management strategies include: 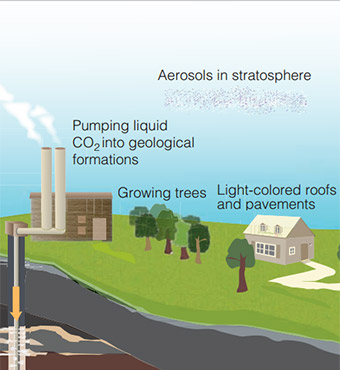 The greatest concern with climate engineering is that it may disrupt natural systems at a very large scale, causing serious damage to the environment and human populations. For example, research at the University of Exeter, UK, suggests that targeting geoengineering in one hemisphere could have a severely detrimental impact for the other. Models show that injections of aerosols in the northern hemisphere would reduce tropical cyclone activity, yet at the same time increase chances for drought in sub-Saharan Africa