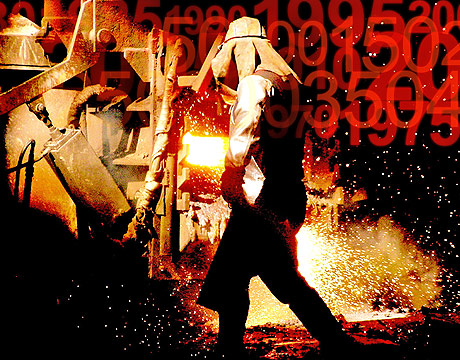 By the Numbers: The Steel Curtain

While steelmakers may be disappearing, gains in productivity mean overall production hasn’t followed the sharp reduction in employment. Data from the World Steel Association, a trade group based in Brussels, shows that in most of the developed world steel production has been roughly steady for a generation. In North America, for instance, production of crude steel has bounced from 125 million tons in 1980 to 135 million tons in 2000 to 111 million tons in 2015. In the same three years in the original 12 member states of the European Union, the production figures were 142 million, 148 million, and 129 million tons.

South Korea has invested intensely in heavy industry, and its steel production has grown accordingly; from 9 million tons in 1980 to 43 million tons in 2000 and 72 million in 2015. India has also had explosive growth in steel over the same period, jumping from 10 million tons to 27 million to 87 million.

But the steel production growth in China is in a totally different league. China was already a large steel producer in 1980; its 37 million tons made it the fifth largest in the world, behind the United States, the Soviet Union, Japan, and West Germany. But industrialization and urbanization had only begun to take hold in China, and by 1996, it was the world’s largest steel-producing nation with 101 million tons produced.

With the entry of China into the World Trade Organization, however, steel production went into overdrive. In the seven years from 1996 to 2003, steel production more than doubled; by 2006, it doubled again. By 2014, China produced 822 million tons of crude steel, or about what the rest of the world produced. As much as 10 percent of its steel production now is exported.

It seems unrealistic to believe that the breakneck growth in China can continue. Indeed, production fell back a bit in 2015, and thanks to the slowdown in the Chinese economy, the industry has seen year-over-year declines in each of the past 12 months.

There is no reason to believe that the steel centers of China will soon resemble the Lehigh Valley of Pennsylvania. But if China’s economy is maturing to resemble that of other major industrial nations, then it stands to reason that China may already be producing as much steel as it will ever need.

For Further Discussion
There are maybe as many steelers left in Pittsburgh as there are cowboys in Dallas.