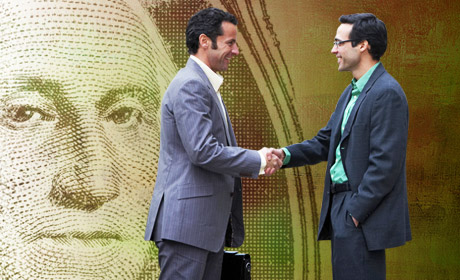 Our relationships with other people can be difficult or pleasant. We choose our friends because we enjoy their company. In business, our relationships are matters of trade. We sell to people or we pay them.

Of course, as we all know, it isn’t quite that simple—or as cold. We swap ideas and favors, too. Some business associates become fast friends. But even in relationships that are solely commercial, the values of human civility—honesty, paying attention, and mutual respect—still apply.

An effective relationship with a respectable supplier can be a considerable strategic asset to a business. I’ve put together a short collection of experiences that have informed my thinking about supplier relationships. The first story captures the best a supplier relationship can offer. The remaining stories represent various forms of dysfunction.

I had a product that was experiencing increasing demand, becoming more popular with several of our clients. This necessitated an increase in production volume and created an opportunity to improve the product to meet customer expectations while decreasing cost. One feature of this product, a weighted base, was originally designed as a machined aluminum plate bolted to a machined steel plate, each individually produced on a three-axis machining center. Expensive materials, significant waste, machine time, consumables—it wasn’t surprising that the cost for these parts was a significant fraction of the whole.

The main purpose of these plates was to lower the product’s center of mass in order to provide tip-over protection. These parts had an elaborately shaped center cutout and a dozen tapped holes that formed the complete part. After some thought, it became clear that some small changes to the product design would allow us to replace the aluminum and steel plates with a single iron casting. With care, the casting could have the required shape, and require no machining or other operations beyond adding the threaded holes. The threaded holes could be added at little cost, using appropriate fixtures and low-cost labor and equipment.

The part was quite simple and represented no special foundry challenges beyond a few considerations when choosing gate locations. All that remained at this point was to find a foundry and work with it to ensure that the part was produced to specification. The difficulty proved to be in finding a foundry that would spend the time necessary to understand the part’s role so they could make tradeoffs as required. Listening was hard to come by, even at the quantities I required.

Most foundries I contacted would glance at the part drawing, insist some change or other was necessary before they could produce the part, and hang up. Later, they quoted prices contingent on their preferred change. I couldn’t get a word in edgewise.

Now, feedback from someone in the business can be very valuable, and changing a part design to fit a supplier’s processes can create value for seller and buyer. However, in the present instance, without understanding the part well enough, the suggested supplier-specific changes were unworkable.

After some effort, I located a foundry in a neighboring state. The president of this foundry listened for the few minutes necessary to understand the role the part had to play in the product. He made some suggestions for part changes, which would facilitate production in his facility on his equipment and decrease his cost while working within design requirements.

Not surprisingly, the cost he quoted based on the big picture was quite good by comparison with other foundries. The parts performed exactly as required from the first article. The part has been in continuous production since that time.

I received the benefit of the supplier’s experience. His suggestion improved the manufacturability of my product in ways that allowed him to quote a lower price than his competitors did and improve his ability to manufacture the part consistently. This brief interaction, taking only a few minutes, improved the profit margin on my product and won this foundry a consistent, lucrative contract. Several of the other foundries lost this job on their unwillingness to see the big picture.

That story ended with the formation of a good relationship. Here are a couple of examples of supplier relationships gone awry.

Sold on a Mold

Some time ago, a client walked into the office spilling over with excitement. This client had built a very successful business and was constantly looking for ways to improve his product and profitability. The reason for his enthusiasm was a small stack of square and round plates he was carrying in his hand.

This particular stack of plates was, in fact, an important component of a vending machine coin acceptor. Originally, the acceptor had been stamped entirely from mild steel on a set of progressive dies. These stamped steel parts had several benefits. The end result was strong and wear-resistant. The manufacturing cycle times were short. (A relatively inexpensive press can churn out hundreds of parts a minute.) Tooling was relatively inexpensive.

This component had one significant drawback in this business owner’s eyes. The square plates in this stack were separated from each other by standoffs riveted to the corner of each plate. This client had been looking for ways to save the time and labor involved in placing and riveting these standoffs.

He happened into a conversation with the operator of an injection molding house and was persuaded that he could save the cost of assembly by redesigning the square plate so that it could be injection molded. This necessitated an investment in new tooling, and an increase in material and process cost over the current part, but, thanks to the lower assembly cost, the redesign would represent a net savings. The part was redesigned, the mold was made, the new part had just gone into production, and he had the first article in his hand.

This client was left with some very difficult decisions because he had allowed the supplier to choose the process for him. What’s more, the original progressive die that cut the square plate could have been altered to include a feature that would take the place of the standoff, at very little additional cost and at much lower risk.

Cheated Out of a Win

I had the privilege, some years ago, of working with an exceptional engineer who was also a world-class athlete. Not surprisingly, he began producing and marketing improved sports equipment. Soon the demand for his products increased to a point that he needed to outsource the critical manufacturing steps. He located a manufacturer overseas, finalized negotiations, signed agreements, and delivered molds and specifications. A short time later, products began to arrive.

After a while, the quality of the products started to decline. The manufacturer was substituting substandard materials. Shortly afterward, products made correctly and with quality materials on the engineer’s own molds came on the market under a competing label. Lacking capital to pursue a difficult and expensive legal course of action, he was forced to abandon the product entirely.

Knowledgeable, reputable suppliers provide expertise, and understand the strengths and limitations of their processes. A solid supplier network, like a well-trained staff, is a valuable asset. Also, exceptional suppliers, like exceptional employees, cost less in the long run, even if they don’t cost the least up front.

An effective relationship with a respectable supplier can be a considerable strategic asset to a business.