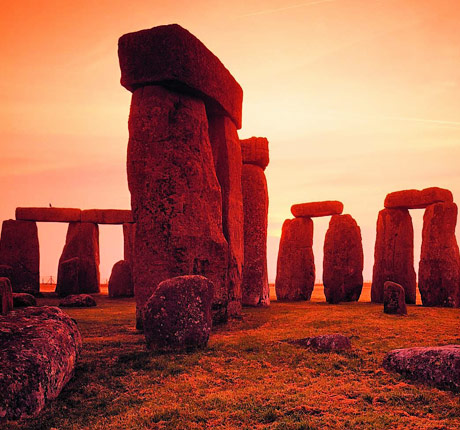 Bestselling novelists have written epic tales imagining its origins. Thousands of people flock to it each year for its supposed mystical and spiritual powers. A fictional rock band even wrote a memorable song about it in the cult movie "This is Spinal Tap."

The ancient Stonehenge monument in Salisbury, UK, has fascinated admirers and confounded scientists and engineers for centuries, primarily because of what is not known about it. In addition to the basic questions of "What is it?", "Who built it?", and "When did they build it?", this great monument has always had one of the greatest engineering questions of all time attached to it: "How in the heck did they build it?"

Carbon dated to about 2,500 B.C., Stonehenge was built long before the advent of even simple engineering advances such as the wheel, pulleys … diesel engines. Add to this the fact that much of the stone used has been traced to sections of Wales nearly 200 miles away, and you have the makings of one of history's all-time mysteries.

Estimates of the manpower needed to transport the stones and then create the structure itself have varied over the years, but all have been immense. In his novel Stonehenge, novelist Bernard Cornwell vividly re-imagined a popular theory, with the stones carried on top of wooden sledges pulled by hundreds of oxen, with the final positioning managed by hundreds of men over many years. Other theories have involved transportation by sea, again with hundreds of men and teams of oxen to drag the stones to and from the ships.

However, in the last few years, a man in Flint, MI, USA, has put forth a new theory as to how many people needed to be involved in the construction of Stonehenge. His estimate, based on the life-sized replicas he has constructed in his own backyard?

That's right. W.T. "Wally" Wallington, retired carpenter and construction worker, has proven that the Stonehenge monument could have been transported, placed, and secured by one man, in a relatively short amount of time. And judging by the video he has placed on YouTube and on his website, "The Forgotten Technology," which first ran on The Discovery Channel several years ago, it doesn't even appear all that difficult.

In addition to an ingenious wooden transport he developed called a "round road," which uses the momentum and weight of the rock to carry it rapidly up and down along an undulating wooden "road" (and hence, conceivably transport it overland quickly), Wallington has developed a method for spinning, adjusting, and moving incredibly large objects that simply makes observers wonder if they can believe their eyes. However, be assured, it's all based on principles of physics and engineering.

"I found a simple explanation for this, to move a block about the weight of a minivan, would be to place a stone underneath it," he says in the video."And once I balance on it, I can spin it." Once he starts this massive block of stone rotating with nothing but simple wood handles and a small stone as a tiny fulcrum, it suddenly becomes very easy to imagine ancient people, surrounded by plenty of both of these materials, doing the same. However, to get the stone going in forward motion, one more trick is needed.

"You can see I've got two handles on my lever, and I can place another stone on this [the opposite] side," he says."Now, every time I spin a half a rotation on each stone, I move the block horizontally the distance between the stones." Amazingly, with this method, he can move a one-ton block 300 feet per hour by "walking" with it, with each rotation being approximately one step. Even more astonishingly, this method scales up to enable him to move a 19,200-pound block, the approximate size of a Stonehenge slab, by himself. Then, assisted by only his two sons, he can get it into position to drop into the ground, raising the slab into position by slowly stacking planks of wood, one by one, beneath the stone, on either side of the fulcrum, until it is upright and can be tipped into the hole.

Wallington is currently in the process of creating his own Stonehenge, with one entire lintel-topped structure already constructed and pictured on his website. This ancient engineering can be applied to the construction of The Pyramids as well: Wallington claims thatusing his techniques, he could build the Great Pyramid of Giza in 25 years, with only 640 workers.

Is the great mystery of Stonehenge solved then? The truth is that minus a time machine, we will never know how the inhabitants of prehistoric Britain constructed this great monument. But we do know the technology to execute this simple method was available, it was appropriate to the environment in which the people of the time lived, and it was certainly possible that a clever human being could have had the same brainstorm Wally Wallington did those many centuries ago.

So this December 21, as the news reports are full of stories of the modern-day pilgrimages made to the site to celebrate the Winter Solstice, and the wonder and mystery of Stonehenge's origins are once again celebrated, you might turn to the person next to you and say, "I know how they did it. It was easy…"

Carbon dated to about 2,500 B.C., Stonehenge was built long before the advent of even simple engineering advances such as the wheel, pulleys ... diesel engines.