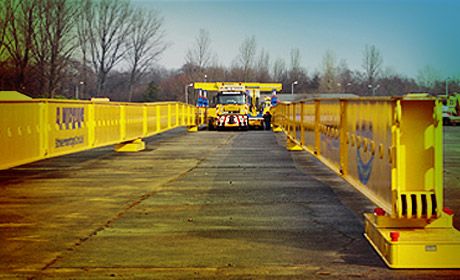 Greiner designed a vehicle that managed weight distribution of the enormous shipment during transport over roads and bridges.

Many historic bridges, some hundreds of years old, are still in service in France. Although these structures have held up extraordinarily well over the years, they were not designed to carry trucks loaded with machine parts weighing almost 300 metric tons.

Aubert & Duval Group, a supplier of steel parts to various industries, had to find a way to transport eight Japanese-made castings for 40,000-ton forging presses from Port la Nouvelle, France, on the Mediterranean Sea, to its new factory in Pamiers, near the Pyrenees Mountains. Aubert & Duval charged P. Wirzius Heavy Assembly of Hinden, Germany, with transporting the presses overland and assembling them at Pamiers.

The most direct route between port and the plant is 150 km, but involves crossing numerous bridges that could not withstand a vehicle plus cargo weighing more than 400 tons. Wirzius charted an alternate route of about 230 km. It included mostly highways but could not avoid five crossings, none of which could handle the anticipated load. Transporting such heavy objects required special permits, even for roads.

To cross the bridges safely, Wirzius enlisted the help of a German heavy-transport firm, Greiner Vehicle, whose CEO informed all concerned that the only available solutions were to strengthen the bridges, or somehow reduce the stress on them. Rather than trying to rebuild or shore up the structures, Greiner took the second course, which involved an innovative use of rail.

The plan involved transferring some of the extraordinary weight to a temporary track system that would channel that part of the load directly to the bridge piers. To succeed, things had to happen more or less simultaneously. Adding to the challenge, Greiner had just switched its design software from a 2-D system to a 3-D product, OneSpace Designer Modeling, from CoCreate Software in Sindelfingen, Germany. 3-D modeling allowed engineers to simulate the system in motion, and thus avoid catastrophes such as collisions.

Everything went well despite the short timeline of about one year. While Greiner was designing, local suppliers were producing critical components for the load-transfer system.

Greiner and Wirzius tested the system by transporting 295 tons of ballast across a 148-m track at an airport site.

Transport from Port la Nouvelle to Pamiers started with two castings, each lifted by an 800-ton hydraulic gantry onto a separate platform trailer. Each trailer had 20 lines of swing axles three across and was driven by a tractor fore and aft. Each trailer also carried a hydraulic gantry, with two cylinders in front of the casting and two close behind, for transferring weight from the road to the track.

The convoy included a fleet of barge-sized trucks carrying track components, each pulled by one huge tractor and pushed by another and accompanied by a fleet of trucks, motorcycles, and support vehicles carrying policemen, highway officials, and a cast of engineers, technicians, drivers, and assemblers.

Building Up, Taking down

The temporary track was designed to cover spans of up to 60 m. The first crossing had two central spans of 27.8 m each. The track-building team began by laying steel mats at load-bearing points on the bridge. The rails over the mats were box girders 1.5 m high with bolt-and-flange couplings. This bridge needed a total of eight for each side of the track—five 10 m long and three 8 m long—that were jockeyed into place with the help of a crane.

Once the track was secure, the gantries on the trailer extended outward and positioned steel wheels onto the tracks. The gantry transferred a total of about 140 tons to the track system, which channeled the weight directly to the bridge piers. The bridge surface held the remaining 290 tons.

The team disconnected the tractors and used a truck-mounted winch to haul the trailers one at a time across the bridge at a rate of about 4 meters per minute.

The convoy did that five times along the route, over spans of different lengths. One bridge span extended almost 60 m between supports and lay on a curve.

On the highway, the trailers traveled at 15–30 km/h, and stopped at points along the route while the teams assembling the tracks prepared crossings ahead. Delivering the castings two at a time, the convoy made four trips in four weeks.

Engineers adhered carefully to both the itinerary and the schedule. Traffic was diverted from roads, bridge sections were closed, and traffic detoured at various locations for a day or more as tracks were laid, crossed, and dismantled.

The trucks carried an identification that read “convoi exceptionnel,” which sounds appropriate enough.

[Adapted from “To Get to the Other Side,” by Harry Hutchinson, Excecutive Editor, for Mechanical Engineering, April 2006.]

3-D modeling allowed engineers to simulate the system in motion, and thus avoid catastrophes such as collisions.