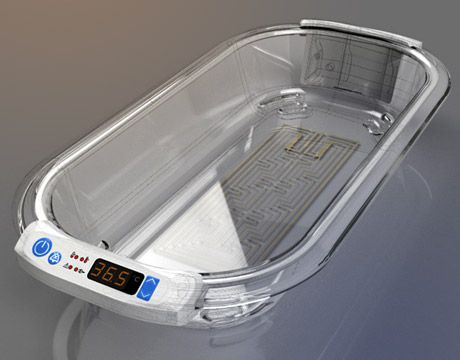 A prototype of Otter, a warmer designed for rural hospitals to treat premature and low birthweight newborns. Image: Design That Matters

Building a Better Warmer for Newborns

Every year, about 4 million babies die in their first four weeks of life, mainly from complications of preterm birth, infection, and asphyxia, researchers say.

But a team with Design that Matters believes they can prevent more than a quarter of those deaths by creating a better newborn warmer. Their Otter newborn warmer is designed to cost much less and consume less energy than the currently available warmers. It is also easy to operate, clean, and sterilize and difficult to get wrong, its designers say. 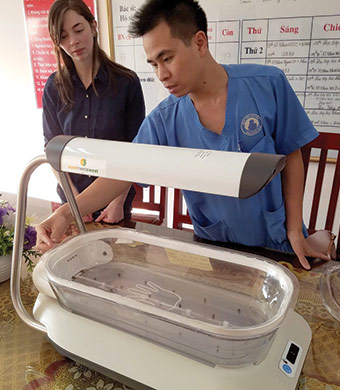 The heating assembly for the Otter newborn warmer was re-engineered to make it less costly to manufacture. Image: Design That Matters

Otter is a warming bassinet for newborns in developing countries that are born prematurely, too low in weight, or both. The prototype, completed last summer, is durable, is easy to wash, and features an easy-to-read and easy-to-use numerical interface. The numbers were a design change suggested by hospital staff in Hanoi, Vietnam, during a field test and fact-finding mission.

DtM is the organization behind the Firefly phototherapy device that treats newborns with jaundice, and their Otter warmer is designed to mimic some of Firefly’s easy-to-use interface.

“The user interface mirrors the design language of the Firefly phototherapy device. The elements of each interface panel are similarly aligned, which makes the user interaction with both devices more intuitive,” DtM writes.

Otter’s heating assembly is now made from a translucent polymer film. Reviewers of Otter’s early design recommended that change over the previous version, as DtM explains: “The original prototype used nichrome wire embedded in a CNC-milled channel in the base of the polycarbonate bassinet. Manufacturing research suggested this would be a prohibitively expensive fabrication process with a high part rejection rate. The heater assembly accounted for $50 out of Otter’s $180 bill of materials.

“Our new alternative, the PTF heater, is similar to the heater wires you might see embedded in your rear windshield as a defroster. It is manufactured in a single step used for generic flexible circuits, and would allow us to more easily incorporate thermal sensors and other components. The PTF assembly would be applied to the bottom of the Otter as a semi-transparent sticker. Our current cost-estimate for the new PTF heater assembly is roughly $20—more than a 50 percent cost reduction.”

More for You: Read the latest about technology and society from ASME.org

DtM outlined the deficiencies in newborn warmers that are available now. These options also amount to the competitive landscape their Otter warmer is up against.

“One alternative to KMC is an incubator, a convective warming device that provides warm and humid air that is regulated by measuring the newborn’s skin temperature with a disposable stick-on probe. Another alternative is a radiant warmer, which provides heating through infrared radiation that is also regulated by skin temperature probe measurements. Unfortunately, neither of these devices is well suited to the context of a low-resource hospital: both are complex, expensive to maintain and difficult to keep clean.

“Newborns are particularly vulnerable to hospital-acquired infections. One Boston NICU technician estimated that it takes 45 minutes to properly sterilize an incubator between patients. Few rural hospitals in developing countries have the resources to follow this protocol. In addition, few can afford to maintain a sufficient number of incubators, so it is not uncommon to find two or more newborns sharing a single device.”

The Otter protoype resulted from a collaboration with medical and engineering experts in Vietnam and a partnership between DtM, the device manufacturer MTTS, and the non-governmental organization Day One Health. The partners plan “to accelerate the development of improved low-cost infant medical devices for low-resource countries,” DtM writes.

After creating their prototype, DtM and partners plan to test it further in Africa. Then they plan another manufacturing review with MTTS in Vietnam (the first review recommended the change in the warming mechanism) and also with manufacturing vendors in China.