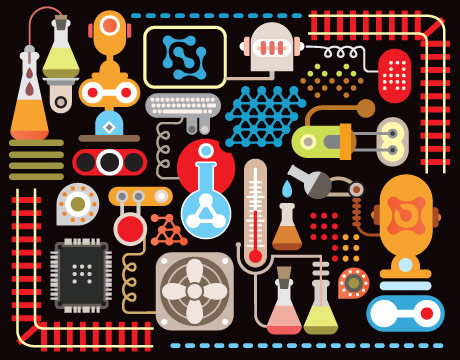 Fifteen years ago, Henry Hess became immersed in the world of nanobiotechnology when he was hired as a post doc to work with kinesin motor proteins and nanofabricated structures to build little transport systems – in layperson’s terms, a nanoscale railroad.

Serving as a research assistant in the bioengineering department at the University of Washington under the guidance of Professor Viola Vogel, internationally recognized for her work in molecular bioengineering, Hess was hooked. Currently associate professor of biomedical engineering at Columbia University’s Fu Foundation School of Engineering, he has made engineering applications of nanoscale motors his life’s work, and in so doing, he is also training the next generation of experts in his lab for nanobiotechnology and synthetic biology.

The breakthroughs come slowly, but the hope is that his research will eventually lead to new approaches to a wide range of nanotechnologies, such as building artificial muscles that work as well as real ones, replacing current day prostheses, better biosensors, and better drug delivery. “[The field] is still in its infancy,” he says. “We are doing far out research. We hope to see it happen before I retire.”

The work involves delving into engineering applications of nanoscale motors that have the ability to create forces and drive active movement with high efficiency. Hess explains that what one can do with the molecular motors, such as kinesin, primarily found in neurons, and myocin, primarily found in muscles, is build nanodevices that have some mechanical activity and that move in some way. “[We] can use these to build biosensors, where we are not pumping around molecules dissolved in solutions, but where we carry around molecules on these nano-railroads, or molecular shuttles, as we call them. One can also try to build actuators and artificial muscles and try to understand how we could in the future be able to build structures similar to muscles which convert chemical energy into mechanical work without burning fossil fuel.”

One important breakthrough came when Hess’s group received funding from the U.S. Defense Department’s Defense Advanced Research Projects Agency (DARPA) biomolecular motors program to determine whether a microfabricated biosensor could be built for environmental and biomedical monitoring applications. DARPA’s specific interest was for sensing TNT, buried and abandoned land mines, and detecting viruses and the like.

“[We] showed we could use molecular shuttles to capture a molecule [for analysis], tag it, and then deposit both the molecule and tag to some detection site,” Hess explained. Because the biosensors are small and function autonomously, they can be inserted into organisms or distributed into the environment for remote sensing, he says.

Hess said his team currently are exploring building actuators to develop artificial muscles, looking at how wear and fatigue, degradation mechanisms important in engineering, play out at the nanoscale. This work about how wear is happening in the molecular shuttles was described in a paper published this year in “Nature Nanotechnology.” He likened it to a car engine, which if not run, will rust away slowly, but if run, the engine will wear out because it’s operating. “We’ve shown that the same is true for molecular shuttles,” Hess says. “What that means for our efforts to build an actuator is that we need to counteract the wear and continuously rebuild our system even as it is running.”

That’s not atypical of the way the body works. The heart muscle is a good example, he says. It consists of motor proteins and associated filaments, and these components get replaced every few days. While the heart muscle operates for decades, the individual components are replaced tens of thousands of times. “To build a successful artificial muscle using these molecular motors, we will have to come up with similar solutions where the system gets rejuvenated frequently so that it can operate for an extended amount of time,” he says.

“That’s a very different approach from the way you engineer at the macro scale, where you use very stable components and have them in place over decades. Here we have to engineer self-fueling into the system and that’s where we are starting at the moment,” Hess explains.

When asked how he feels about working on a project with such a lengthy timeline, Hess says he thinks about LED lightbulbs and solar cells that have taken decades to develop to make them marketable. “The first LED bulb was made 90 or so years ago, and it has taken 60 or 70 years of continuous small improvements to get the point where this technology can compete with the lightbulb invented by Thomas Edison,” he points out. “When you think about it, it’s not that unusual that it takes 50 years or something like that for technology to tool up and have an impact on daily life. Sometimes you get lucky, and it goes faster. If you look at history many things took a long time to make use of it. What we are trying to do is difficult and interesting. It not only teaches us something about technology but also helps us appreciate better how biology works. I find it very satisfying to research. Not everything has to happen by tomorrow.”

For Further Discussion
To build a successful artificial muscle using these molecular motors, we will have to come up with similar solutions where the system gets rejuvenated frequently so that it can operate for an extended amount of time.Prof. Henry Hess, Columbia University