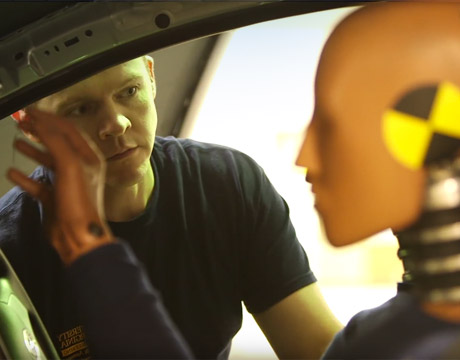 Dummies being prepared for a test at UVA’s Center for Applied Biomechanics. Image: University of Virginia

Rollovers account for only two percent of car crashes yet are responsible for one third of fatalities on the road, says Jason Kerrigan, mechanical engineering professor at the University of Virginia and a principal investigator for the school’s Center for Applied Biomechanics. Interestingly enough, the work of his team has been in part about looking at rollover safety testing from an angle that could be easy to overlook: that of the crash test dummies taking the hits during testing.

“First of all, rollovers can be devastating,” he says. “When you consider all the Gs you can be dealing with, you can end up fully ejected out of the car without a seatbelt [as a passenger] but, even the drivers, for example, can also find themselves in the top corner of the car.”

Funded by a grant from the National Highway Traffic Safety Administration, they are out to improve the dummies used in the testing process and it could have a huge potential effect, he says.

“We wanted to do a biofidelic analysis on how much a dummy acts like a real human,” he explains. “We did match testing between dummies and a human surrogate. If at low speed, you might use a human volunteer but these tests were too high speed so we used human cadavers. We learned the dummies needed to be changed. We wanted to modify an existing dummy and that work incorporates not just making it look like a cadaver but making it look like a breathing human.”

They came to learn that the dummy spines were too stiff. “In terms of articulation, the human spine has joints between every pair of vertebrae and there are many joints all the way up, much different than with dummies,” he says. “A big issue is head and neck injury. We believe by increasing the joints and changing stiffness, it will have better prediction.”

Modeling, as you might have guessed, was a major aspect of their work. “We took a model of the human body that was created by existing software. We saw some limited functionality so my Ph.D. student Qi Zhang went back to the model and did some removing and also added some musculature that wasn’t there, like torso and abdomen, and simulated their effects. He worked ultimately on muscle modeling to improve this muscle or reflexive response.”

In the end, Kerrigan believes they showed that the dummy doesn’t really match kinematically. “We asked if it should be like a cadaver because rollover is at lower acceleration for side impact, so we were using a commercially available model that allowed us to predict active muscle response. The great thing with the computer is we could run 20 tests on it in the time it takes to do one test in the laboratory.”

The next step to him is to modify the actual dummy components. “While we can make proposed changes to the dummy, we are not in the position to do the fabrication end and, at some point, someone may want to do that,” he says. “I’d like to see it go much further, and hopefully it will.