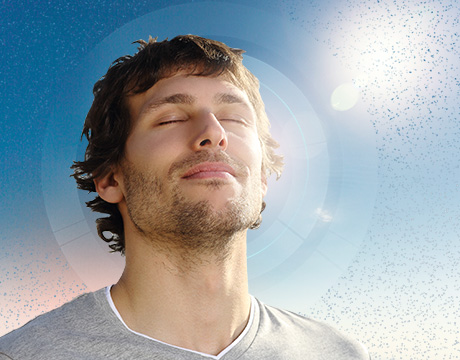 How much of the brown haze over a city’s skyline is also in living rooms? And what, exactly, is in that haze? There may soon be an inexpensive way to find out. A new handheld air quality monitor called c-Air, in early testing now, compares favorably with much more pricey machines.

The device is based on a CMOS (complementary metal-oxide semiconductor) image sensor, the same found in some digital cameras. Prof. Aydogan Ozcan and his team of engineers at UCLA have created a monitor that collects and places samples of microscopic particles in the air directly over the sensor. No lens required. The researchers call the technology “computational lens-free microscopy.”

An operator can control the device through a mobile phone application. After samples are scanned, processing takes place through analytical algorithms on a remote server. The resulting device may be more accurate and capable of sampling a much higher volume of air than commercially available air quality monitors. And it could cost one-tenth or even one-hundredth of the price.

We have made some important progress on the same c-Air technology by merging it with machine learning techniques or label-free detection of mold particles. Prof. Aydogan Ozcan, UCLA 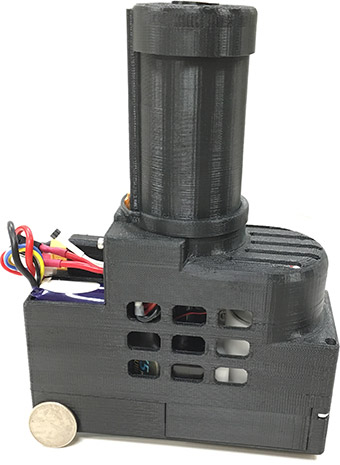 For You: Nanosatellite Studies Space Bacteria

“When we breathe, we’re constantly breathing in molds, pollens, bacteria, and viruses. By the end of today, many of you will have inhaled more than a billion viruses,” Ozcan told an audience at the Social Innovation Summit in Washington in 2016. “So, we need technologies that will, in a mobile, cost-effective platform, measure and quantify these, with the same sensitivity, precision, and accuracy you would expect from high-end institutional governmental devices.”

Indoor and outdoor air pollution is linked to 6.5 million deaths each year, accounting for 11.6 percent of all deaths around the world, according to the World Health Organization. Almost 90 percent of those death occur in low- and middle-income countries.

The c-Air device counts and measures microscopic particles in air, called particulate matter, or PM. Knowing PM concentrations and what kinds of particles are in the air can help estimate the damage that pollution might cause. Particles that are 10 μm in size can lodge in the lungs and are a cause of cardio-vascular disease, while 2.5 μm particles are thought to cause cancer. As Ozcan and his team explain in a research paper, air sampling stations use either beta-attenuation monitoring or a tapered element oscillating micro-balance instrument. They are not very portable, weighing in at about 30 kg (66 lb.), cost anywhere from $50,000 to $100,000, and require trained technicians for maintenance.

Commercially available portable air particle counters cost much less, roughly $2,000, but some can sell for up to $8,000. But they handle lower volumes of air and their accuracy may not be as high as the new c-Air device. Commercial counters can sample three to four liters of air per minute and their accuracy suffers when analyzing air with extremely high or extremely low concentrations of pollutants. In contrast, c-Air screens 13 liters of air per minute and could cost as little as $50 at a high volume of manufacture, or about $200 if produced in low volumes. The device also produces images of the particles, which other portable counters are unable to do. By imaging the particles, researchers can identify their types to build a picture of what kinds of pollutants are in the air in each area. Before c-Air, portable counters could only collect air samples to send to a laboratory for imaging.

Specialized parts, high prices, and the requirement for maintenance and laboratory support make many commercial air monitors impractical in many regions of the developing world. But c-Air seems to have solved many of those problems.

The air quality monitor is a prototype in development.

Read More:
Targeting China’s Mountains of Sludge
5 Reasons for Engineers to Give Back
System Helps Self-driving Cars See in Fog