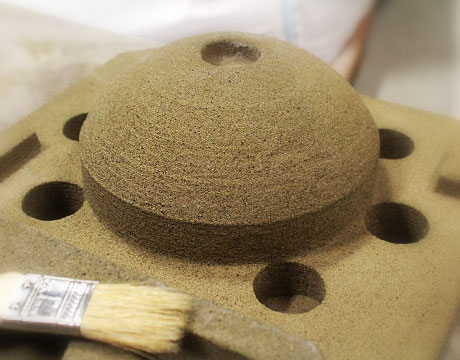 A 3D mold printed from a CAD file. Image: Viridis3D

“When you walk into a foundry, one of the things you are likely to see is a section of the building with rows and rows and rows of match plates with patterns on them,” says Howard Rhett, technical support leader for Viridis3D, of the sandcasting business.

These patterns are the copies of parts that they’ve made for other companies. They’re kept on hand so that the foundries can again pack sand around them to make a new mold when called upon to make the part again. “They have to make them, have to keep the stuff in inventory. The foundry is actually paying to keep these things warehoused,” he says.

But Viridis3D is now making a 3D printing system for sandcasting that will put an end to the need for such storage. It fully automates the simultaneous creation of molds and patterns out of sand.

Viridis3D is not the first company to apply 3D printing to sandcasting, but they’ve managed to do it for a lot less. “I like to call us the Apple of sandcasting printing,” says Rhett. “We take off-the-shelf components and bring them together to offer a solution for a lot less.”

There are three primary components that make up the system. A Palmer hopper holds the sand, while a robotic arm moves the sand to the printing bed and sweeps across it as the third component—the printing head—puts the sand down where it needs to go.

A liquid binder holds the sand together to make the object inside the mold. As the robotic arm moves, in a windshield wiper arc, it lays down the mold layer by layer like many other 3D printers. The result has a resolution of 100 dots per inch in the X and Y axes and a half a millimeter in the Z layer. The average grain of beach sand is roughly a third of a millimeter.

Viridis3D will ship their propriety sand to any company that might need it, but the system can handle almost any sand a foundry might already be using. “There’s a cost associated with shipping three tons of sand across the country,” says Rhett.

Though their printer is built from off-the-shelf parts, getting them to work together was no cakewalk. “We've got twelve print heads that have to fire in unison and have to fire precisely at the same time, accurately and consistently every time,” says Rhett. The print heads are staggered to each other, unlike the linear print heads of an inkjet printer. They have to maintain a specific distance over the bed of sand and synchronize with the robot. “And there’s the environment, the kind of sand fed through the system, humidity requirements, all kinds of changes we've been ticking off one by one. If it were easy there would be four or five companies doing this, but it's not.”

The result is a system that allows foundries to repurpose (or at least minimize) those rooms full of patterns.

“If you have medium-to-low use, you would putthose patterns on a thumb drive, then you don’t have to worry about humidity control, or creatures running around chewing on things,” he says.

Foundries with the Viridis3D system could receive a client’s CAD file for a large mold and be pouring molten metal into it that same day, says Rhett. “It’s that aggressive.”

For Further Discussion
I like to call us the Apple of sandcasting printing. We take off the shelf components and bring them together to offer a solution for a lot less.Howard Rhett, Viridis3D