A Boat that Walks on Water

A Boat that Walks on Water 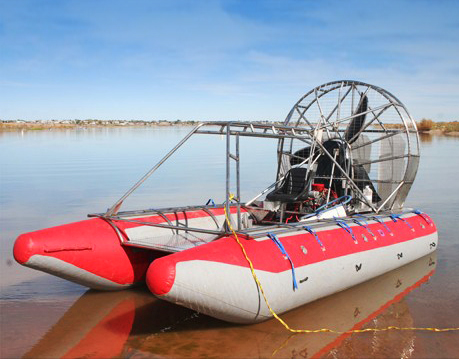 Flying through the water, barely skimming the surface, loud and seemingly proud of it—even sometimes pushing past alligators —this is the world of the airboat.

But it is evolving from a small recreational craft for a few to becoming a vessel with vital search-and-rescue capabilities for many. Billy Miller, owner of Airboat West, Embudo, NM, discovered the latter capability while helping out during Hurricane Katrina and feeling unnecessary trips were being taken back and forth.

“Most airboats are for a shallow haul and top heavy but can be terrible in the open sea,” he says. “I wanted to make one where the entire boat can be reassigned for a low center of gravity, take a lot of people, and have a whole apparatus with a roll bar designed for survival rollovers. Most airboats are sitting up high and tall to see down and get gators, but in New Orleans you had low-hanging power lines that could clip people.”

Designed with SolidWorks 3D design software, Miller’s “Wave Buggy,” which can hold 15 passengers, even incorporated the input of engineers who had worked at Los Alamos National Laboratory. “I wanted great minds helping me,” he says. “And it was important that it was efficient in deep water and white water.”

The Wave Buggy can be used for rescue or recreation, but regardless of function, when designing an airboat, you need to decide what kind of horsepower is most suitable, with 500 hp fast becoming the minimal rating, Miller says. Also, you need to know what kind of speed to aim for. In general, airboats go a lot faster than other boats because they’re not using the water for power or propulsion and, when they’re really moving, only inches make contact with the water for less contact friction, he adds.

There’s also the rudder. “Mine is designed like little wings and directs air to where you want it to go,” Miller says. “It sits on top of propellers and in the very center. The wind comes off of it like a tornado.” Miller designed his boat with a 79-in propeller and 49-in rudders so they catch the center of the propeller and direct it. With high-performance motors, the amount of power required to turn a propeller and for the required low-end torque means you’ll want to produce 4000-5000 rpm, he says.

For Miller’s hull, he designed it with tubes made of Hypalon, PVC, and polyurethane, allowing the boat to sit up higher. And his airboat, like others, is without brakes, using the reverse motor to stop. Some even do a 180-degree spin-on-a-dime to slow down, he says.

One of the most important rules has nothing to do with mechanics, however, as he says to always remember to bring a set of air plugs. “How loud it will be depends on the propeller and what exhaust system. Mine is better because it’s routed with flow-through motors and a good exhaust but it’s never going to sound soft,” he laughs.

But at least, Miller says, the ride is smooth. “It’s incredible how effortlessly it moves. Four inches off the water. How can you not have fun when you’re flying!”

For Further Discussion
Most airboats are sitting up high and tall to see down and get gators, but in New Orleans, you had low-hanging power lines that could clip people.Billy Miller, president, Airboat West