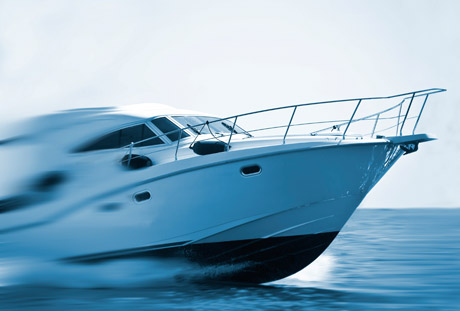 Mechanical engineers can visualize themselves easily in a buzzing power plant or by an old boiler, but how about flying in a sailboat or powerboat, ripping through gorgeous strands of blue sea? Boat design offers adventurous opportunities for those with a natural affinity for the water, to go along with critical thinking skills. William Lasher, professor of mechanical engineering at Pennsylvania State University, who has spent the last decade focused on sail dynamics, says this is a field that becomes passion as much as career.

"Yacht design, for example, puts you up against the structural issues of racing boats, focusing on incredibly complex loading conditions," Lasher explains. "Show even a couple percent improvement in the speed and it's a major difference." Lasher utilizes finite element analysis, looking at areas such as hydrodynamic resistance of the boat in flat water versus performance in waves, or, for powerboats, the design of the propeller to correspond with the engine.

"When it comes to finite analysis, especially at the higher end of racing boats for structure, one of the places used a lot is in the design of keels," he says. "They hang on the bottom of the boat and it serves the purpose of keeping it from slipping sideways but is made out of lead. Some more recent boats are using canting keels to swing the boat sidewise, shifting from one side to the other to get better stability while dealing with the loads on them. When you're doing that with tens of thousands of pounds, you need to get pretty exact."

Lasher says design can often start with a blank sheet of paper. "You're writing down the basic parameters of the boat: how long, wide, weight, how much sailing are you putting on it, what conditions are you sailing in," he says. A velocity prediction program is used to take these parameters and find an equilibrium balance between the forces on the sails and the forces on the hull.

"The sails are trying to push it forward and sideways and the hull offers resistance," he says. "And that's the most interesting thing about it—how a very complex system interacts with everything else and it's hard to change one thing and not have it affect something else." It's the tradeoffs of constantly putting more sail on it, then needing more stability, he adds, or making the boat wider but then affecting the center of gravity. "You're trying to improve the performance but dealing with the ‘penalty of improvement.'"

For cargo ships, Lasher says designing is adjusted more to the economic impact, trying to carry as much cargo as you can safely for the lifespan of the ship and safety of the passengers. "These ships have tremendous loads and need to design a structure to support them; that's what's driving you when you consider the cost if your design is off," he says. "I remember when I was a student we went to a Society of Naval Architects meeting and toured an SL7 (sealand ship) and went down below. You'd be just amazed by the six inch-thick metal plates, how much material goes into it … it's a lot to manage."

But how do you get involved? Lasher says a good way is to get a Master's degree in naval architecture as he did, feeling that combining this with a Bachelor's degree in mechanical engineering would give someone a good chance to pick up what boat designing requires. But you must also be committed to continuing to educate yourself long after the diplomas. "There are a number of good books out that outline processes and techniques at various levels," he says. "But the Bible is really Skene's Elements of Yacht Design revised by Kinney."

Finally, Lasher says you'll need one more thing: patience. "Someone once said to design a [large] ship you have to take the Empire State Building's structural issues, turn it on its side and run it through waves of 25 knots," he laughs. "Now that's not an easy challenge!"

Someone once said to design a [large] ship you have to take the Empire State Building's structural issues, turn it on its side and run it through waves of 25 knots. Now that's not an easy challenge!William Lasher, professor of mechanical engineering, Penn State University