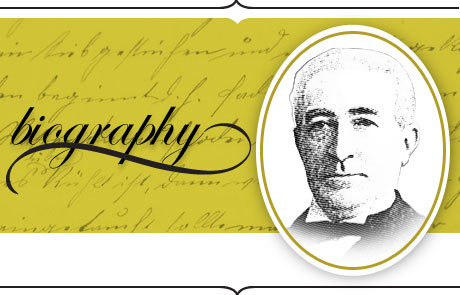 Most people probably don’t know who invented central steam heating, but they’ve certainly felt the impact of that innovative system used throughout the world. If he were alive today, the man they should thank is Birdsill Holly, Jr. (1822 – 1894), a mechanical engineer and hydraulics inventor, who holds 150 patents, a number second only to those held by Thomas Edison.

The son of a mechanic, Holly was born November 8, 1820, in Auburn, NY, and grew up in and around Seneca Falls, a bustling mill-powered industrial town, that no doubt fed the water pump obsession he later turned to gold.

After Holly’s father died at age 37, Holly dropped out of primary school, and at the age of 10 apprenticed himself first to a cabinet-maker then a machinist in town. He later worked as superintendent, then proprietor of a shop in Uniontown, PA.

Despite only a third grade education, Holly was a natural inventor who quickly sought to make a name for himself. In his twenties, he became a founding partner at Silsby, Race & Holly, and served as the visionary behind the firm’s successful manufacture of hydraulic machinery and steam-powered fire engines. And it was at Silsby, which was located on a five-acre island in the Seneca River, that he invented the Silsby steam fire engine with its unusual (at the time) rotary engine and pumps. Silsby turned out its first steam fire engine in 1856, and then went on to hold the record for most steam fire engines built by any U.S. firm.

In 1859, Holly was ready to strike out on his own when he founded Holly Manufacturing Company in Lockport, NY, where he designed and built a complex tunnel system that drew water from the Erie Canal to power his factory. Blasting a huge tunnel out of the hard Lockport dolomite on the north side of the canal, this tunnel, or hydraulic raceway, drew water from the canal above the locks. The water traveled downhill through the tunnel to the Holly factory to spin a water wheel, or turbine, that delivered close to 3,000 hp to each piece of machinery via a system of pulleys and leather belts. This method Holly created for pumping water (and powering machinery) drew the attention of engineers worldwide, including Thomas Edison, who came to Lockport to observe Holly’s invention. But that was only the beginning: what Holly went on to do with all that waterpower was the big news.

With the factory up and running, Holly set about finding a way to both improve fire-protection systems and more efficiently deliver water to the public. In 1863, using Lockport as his proving ground, he designed and built the Holly Fire Protection and Water System, which used water-turbine or steam-engine–powered pumps to propel water into the town water mains under a consistent pressure and to fire hydrants around town. In 1869, the system, which improved upon earlier incarnations of the fire hydrant, ultimately earned Holly his first patent, number 94749, for an “improved fire hydrant” that looked much like those found on every city block today.

By the mid-1860s, much of the U.S. and Europe had adopted Holly’s invention, with the exception of one city that notoriously did not: Chicago. After the Great Chicago Fire of 1871 burned for three days, killed hundreds, and destroyed 3.3 miles of that city, Chicago officials purchased Holley’s fire-protection systems for all of Chicago.

In 1877, the restless inventor formed the Holly Steam Combination Company, where lightning struck once again. There he began working on a steam-heating system, which had at its center one large central plant that, via a network of supply and return mains, would send heat to multiple surrounding buildings at greater thermal efficiencies than current methods, which used isolated individual boilers to heat buildings.

As was often the case, Holly had difficulty attracting investors. Undeterred, he constructed a small boiler in his home from which he ran a steam line 100 feet from his house to a property next door. He then invited an audience, including Edison, to watch the disbursement of the heat generated. It worked without a hitch, and over the course of the next 10 years, Holly continued to improve the system, racking up more than 150 new patents by the time he was finished. The result: central steam heat spread in cities across the U.S., and Holly’s firm, reorganized under the name American District Steam Heat Corporation, faced an ever-growing demand. Before the end of the century, a number of district heating companies had formed, principally in large cities.

Holly’s life is notable for all of the inventive ideas he advanced over the initial skepticism of both the public and investors. His one failure, however, was a dream that he would live to see someone else realize: the skyscraper.

Convinced that the Niagara Falls area would someday become a major tourist destination, he proposed the construction of a 700-ft-tall structure in the middle of the Niagara River on Goat Island as another draw for visitors. Unable to attract investors to realize his vision, he tried peddling his plans in New York City, where the expanding population made a good case for building up rather than continuing to build out. But he found no takers and eventually had to admit defeat. The skyscrapers that began to crop up in New York before he died in 1894 of heart failure certainly confirmed to him—and those who remembered his plans—that he, as usual, had been on to something big.