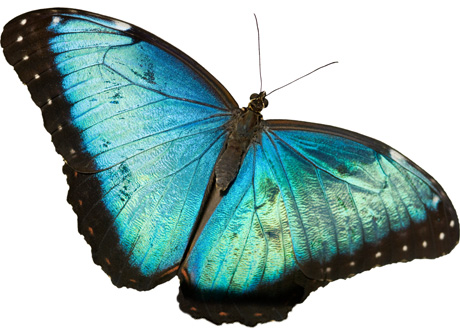 Engineers are inspired by nature to create solutions for challenging problems that face our society.

It is hard to improve on the real thing—nature has been engineering itself since the first life forms appeared on the planet. As human engineering solutions become more challenging, engineers are taking a closer look at how natural processes work, often at the molecular or atomic scale, for inspiration; such as the changing colors on a butterfly's wings, the motion of an insect's joint, or how termites build towering structures. These working prototypes have been with us all along, it's just a matter of recognizing them and studying their design and function.

According to the Biomimicry Guild, "Biomimicry is an innovation method that seeks sustainable solutions by emulating nature's time-tested patterns and strategies—for example, a solar cell inspired by a leaf. The goal is to create products, processes, and policies—new ways of living—that are well-adapted to life on Earth over the long haul. Biomimicry follows life's principles, such as build from the bottom up, self-assembly, optimize rather than maximize, use free energy, cross-pollinate, embrace diversity, adapt and evolve, use life-friendly materials and processes, engage in symbiotic relationships, and enhance the biosphere. By following these principles you can create products and processes that are well-adapted to life on Earth."

For example, when chief engineer Eiji Nakatsu was looking for a way to prevent the sonic boom that resulted when the 200-mph Japan's Shinkansen Bullet Train emerged from a tunnel, he turned to the natural world for inspiration, looking for "something that travels quickly and smoothly between two very different mediums." He decided to model the front of the train after the beak of a kingfisher, which can enter the water at high speeds with very little noise or splash. Not only did this design eliminate the noise problem, the train now uses less energy and travels 10% faster.

In another example, Omni-ID utilized biomimicry to develop new passive radio frequency identification (RFID) tag technology. The problem was the inability to read RFID tags that are in close proximity to metals and liquids. For example, if a traditional RFID tag was placed on a metal roll cage or submerged in liquid, no return signal would be received or it would be quite unreliable. As a result, this problem was a major obstacle to the widespread adoption of passive ultra-high-frequency (UHF) RFID technology.

"The team took learning from an earlier program that had studied how the wing structure of the Blue Morpho butterfly reflects light with unexpectedly high levels of efficiency," says Tracy Gay, vice president of marketing for Omni-ID. "Taking the fundamentals from the cavity structure of the butterfly wing, we enhanced light reflection and applied it with great effect to microwave frequencies, which produced spectacularly effective passive UHF RFID devices." Based on this research and development, Omni-ID is the patent holder and inventor of an effective on-metal, passive RFID tag technology.

According to Janine Benyus, author of Biomimicry: Innovation Inspired by Nature, human beings are at a turning point in their evolution.

"Though we began as a small population in a very large world, we have expanded in number and territory until we are now bursting at the seams," she says. "There are too many of us, and our habits are unsustainable. Having reached the limits of nature's tolerance, we are finally shopping for answers to the question: 'How can we live on this home planet without destroying it?'"

Just as we are beginning to appreciate what we learn from the natural world, she notes, our models are starting to "blink out," and not just a few scattered organisms, but entire ecosystems. "A new survey by the National Biological Service found that one-half of all native ecosystems in the United States are degraded to the point of endangerment," she says. "That makes biomimicry more than just a new way of viewing and valuing nature. It's also a race to the rescue."

Bert Bras, a professor of engineering at Georgia Institute of Technology, prefers to call biomimicry "biologically inspired design." "Biomimicry implies copying and simply copying is not necessarily the best or smartest way to do things," he says. "Inspiration allows the engineer to take the best from nature and put it in a new (engineering) context."

His research takes a holistic view in identifying fundamental principles that occur across multiple biological systems and that can provide new insight in how to do sustainable design and manufacturing. "For example, people have heard about the Lotus effect that has led to self-cleaning surfaces in some products," he says. "This principle of using a hydrophobic material with nano/micro bumps is not limited, however, to Lotus leaves but also occurs in butterflies, whales, etc. It is actually an anti-fouling principle that makes sure parasites and dirt do not adhere to an organism. It occurs in many species."

Bras is studying how ecological principles from ecosystems can help design better manufacturing networks. "Some ecologists, for example, use a metric called cyclicity to see how well-connected an ecosystem is," he states. "The higher the cyclicity value, the better. We studied industrial networks, including industrial ecosystems, and found that their cyclicity is much lower than in natural ecosystems. We also observed a correlation between cyclicity and thermodynamic efficiency in Brayton and Rankine thermodynamic cycles."

Once scientists start looking closely, they will realize that nature is filled with incredible design solutions for common and uncommon engineering problems. "One of my colleagues, David Hu, has looked at how a dog shakes off water," says Bras. "Can that be a new way of drying clothes rather than our standard approach of simple rotational spin followed by vaporizing water through heat?"

It's also important to note that true biologically inspired work requires a multi-disciplinary team. "You need biologists," says Bras. "For example, my students and I work with my biology colleagues who direct Georgia Tech's Center for Bio-Inspired Design (CBID)."

Ultimately, Bras hopes biomimicry will help people realize the immense need to preserve these biological systems. "A fish in an aquarium could be a source for locomotive inspiration, but a school of fish in the wild could potentially also show us new ways of social networking or traffic management," he says. "So there is an important imperative to preserve our biological systems in order to learn from them before it is too late."

Inspiration allows the engineer to take the best from nature and put it in a new [engineering] context.Prof. Bert Bras, Georgia Institute of Technology