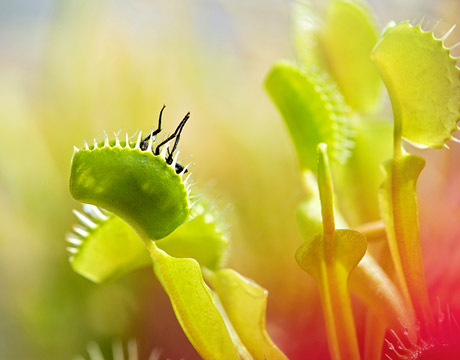 A Venus flytrap with its prey.

There are some things in nature that make you shake your head in wonder. Go through a garden and the vast majority of the wildlife will be warm and comforting, beautiful even.

Then there is the Venus flytrap, sucking down unsuspecting insects with a snap of its jaws. It is aptly named as it doesn’t even seem it should belong to this planet. But as strange as it is, what allows it to eat dinner has become the inspiration for engineering work at Dartmouth College.

Explains Zi Chen, assistant professor of engineering at Dartmouth, “The Venus flytrap plant can move really fast in the absence of muscles and nerves through a two-touch mechanism they have sticking out of lobes. If you touch it once then it doesn’t move, but a second touch in about thirty seconds and it triggers the capture mechanism. The second signal is to confirm that something is alive, that the object isn’t like a falling rock. Then it reacts.”

One influence of this amazing plant has been an increased focus on the possibilities of having materials couple mechanical touch with electricity or couple temperature change with mechanical response, Chen says, adding that they’re trying to mimic the latter process with smart materials.

“We can control an exchange with an electric impulse and can program the structure to move to a different position. We can make it bend or twist or stretch,” he says. “I think you want this to lead to either a wearable or an implantable device for biomedical purposes—doing some biomedical surgery and making a device get to positions where it wasn’t easy to get through.”

They’re also investigating another aspect of the plant not all consider. “Looking at the Venus flytrap, many don’t realize the mechanism is more like a popper,” says Chen, who has a Ph.D. in mechanical and aerospace engineering from Princeton University. “It’s been studied for a while and you find geometric parameters related to whether the popper can be bi-stable or not, so we’re working on a diagram related to this. We actually found originally that most people would think the flytrap is symmetric but we found it can be asymmetric in a lot of cases. So one lobe can move faster than the other and we use a high-speed camera to visualize this.”

There’s even an artificial muscle focus one Dartmouth student is working on. “We designed another set of bi-stable structures so the system can change from a twisted structure to helical and do dramatic shape change and pull on things for large force,” he says. “We already developed the prototype and there’s a lot of possibility in what we can do with this system as a pneumatic version of an artificial muscle. The idea is we can trigger it to go from different stable states and can, for example, push on something. We are even thinking about prosthetics as a possibility for this.”

As the work continues, Chen hasn’t stopped being blown away by his original plant model. For example, how it lets go of smaller prey and only keeps the “right-sized” ones. “And the more it struggles, the tighter the Venus flytrap closes and secretes juice; then it can reopen in a few days and set up for the next possible prey. It’s great for engineers to get inspiration from nature’s design and I think this is easily one of its more fascinating ones. And it also leaves that interesting question: How did the Venus flytrap evolve to this? Some answers aren’t easy to find.”

Learn the best practices of bringing your research to market and creating marketable solutions at ASME’s COMS 2016.

For Further Discussion
It's great for engineers to get inspiration from nature's design and I think this is easily one of its more fascinating ones.Prof. Zi Chen, Dartmouth College