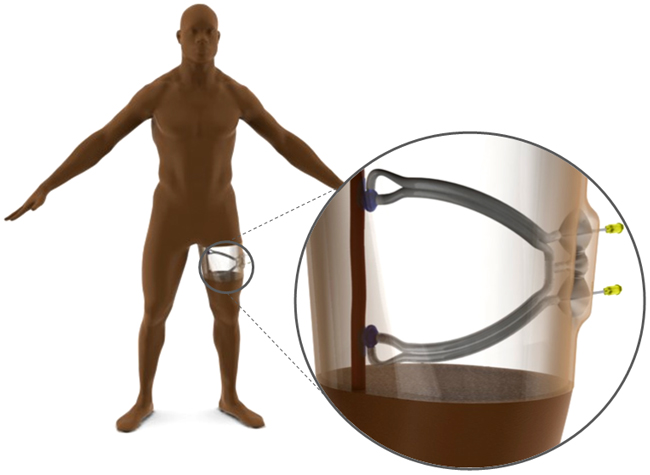 A device in development at Johns Hopkins University could improve how hemodialysis is performed and save hundreds of millions of dollars in healthcare costs. Image courtesy Hemova team.

When Peter Li and four fellow engineering students toured the renowned Johns Hopkins Hospital in East Baltimore last summer, they examined physicians repairing damaged blood vessels in dialysis patients. When the students, at the time enrolled in a master's program in bioengineering at Johns Hopkins, learned the impaired blood vessels result from failure rates in common dialysis access methods like catheterization, the young engineers went to work on a potential solution to the problem.

Collaborating with the medical community at Johns Hopkins, the students designed a working prototype of a new form of vascular access they believe will revolutionize hemodialysis. Others agree the students are on to something big, as a judging panel awarded Johns Hopkins first place in the 5th Annual ASME Innovation Showcase (ASME IShow) held in June, in Dallas.

The medical innovation, named the Hemova Port, is a fully implantable device that connects directly to the femoral vein using a novel mechanical valve. Because it is sutured directly in the vein, without the use of an indwelling catheter or arterio-venous shunt employed in typical dialysis treatments, the Hemova can take advantage of the body's naturally high blood-flow rates, reducing the risk of vessel wall injury.

"The most revolutionary aspect of the Hemova Port is the direct vascular access, allowing the device to work in compatibility with the naturally occurring high blood-flow rates in the femoral vein," explains Brandon Doan, who will be collaborating with Li to move the project forward. "Catheters and other types of access ports used today produce unnaturally high blood flow which can cause veins to eventually narrow and collapse."

The narrowing of the vein, or stenosis, causes 85% of device failures and hundreds of thousands of intervention procedures each year, according to clinicians. Today's dialysis access devices fail within one to two years on average, report clinicians.

The Hemova Port enables physicians and their staffs to combat a major problem associated with traditional dialysis–infection. Owing to direct vascular access, the Hemova is a completely subcutaneous port which uses the skin as a natural barrier to infection. "The Hemova Port is a biologically neutral device, which helps to reduce the incidence of infection," says Doan. "We also have incorporated a novel cleaning system to further reduce this risk."

At the core of the Hemova is the valve, which allows what the researchers refer to as "selective communication with the blood"–opening during a dialysis treatment and closing when the patient is off dialysis. This ability of the valve to open and close allows the Hemova to maintain a normal flow rate, maintaining the integrity of the access site and lengthening the lifetime of the device.

"The valve system is unique," says Li. "The team has collaborated with mechanical engineers in different fields and put the valve mechanism through several design iterations before arriving at a working model."

The student team has tested features of the new device on pigs, and those initial tests have produced successful outcomes. The next step is to test the Hemova on sheep, which will allow the students and their medical collaborators to assess the condition of veins and to determine if stenosis occurs. Johns Hopkins hopes to initiate clinical trials on humans in the future, pending regulatory approval.

Funding will be required to advance the prototype to these next stages of clinical trials, testing and experimentation. The team received a $10,000 award from ASME for the first-place finish in IShow, and also has secured $20,000 in funding from Johns Hopkins University.

Many of the nontechnical issues pertaining to regulatory approval, intellectual property agreements, licensing, and technology transfer are included in a business plan that was required as part of the entry package at ASME IShow. Getting the Hemova Port into the healthcare marketplace will be arduous, but the students are hopeful.

"Approximately 1.5 million people worldwide and 350,000 patients in the United States require hemodialysis, and they depend on reliable vascular access sites in order to live," says Doan. "We believe the Hemova will make a lasting contribution to the quality of life of these kidney dialysis patients, while decreasing costs in the healthcare industry."

We believe the Hemova will make a lasting contribution to the quality of life of these kidney dialysis patients, while decreasing costs in the healthcare industry.Brandon Doan, Johns Hopkins University/Team Hemova