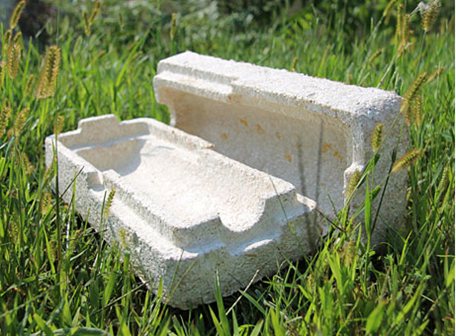 When someone says "There's a fungus among us," it's usually a cause for alarm. Not so with the mushroom-based biocomposite material developed by Ecovative Design. That is, unless you sell Styrofoam.

By some estimates, half of all landfill volume is made up of non-biodegradable, potentially toxic packing materials used to ship computers, home electronics, and small appliances. Increasingly, public health officials are noticing more and more firefighters suffering from exposures to burning construction materials made from similar non-renewable sources. The market for these materials is ripe for change.

Ecovative has established a strong toe-hold in the green materials business with its spore-free, non-allergenic, fungus-based polystyrene alternative. Think of it as a bright green replacement for white packaging peanuts, party coolers, panel insulation, and other high-carbon-footprint materials.

Based in upstate Green Island, NY, the company is the brainchild of CEO Eben Bayer and Chief Science Officer Gavin McIntyre, two recent mechanical engineering graduates of nearby Rensselaer Polytechnic Institute. The two have earned international recognition and media coverage for transforming useless pollutants into a practical, profitable material with potentially limitless applications.

With support from RPI's business incubator, critical faculty mentoring, government grants, and the wisdom of a card-carrying mycologist, Bayer and McIntyre launched Ecovative in 2007. Soon after, they took top honors in ASME International's inaugural Innovation Showcase competition, The Netherlands' 500,000-Euro PICNIC Green Challenge prize, and other innovation competitions. The rest is hyphae history.

The seeds of Bayer's entrepreneurial career took root during boyhood hikes in the mushroom-cluttered woods around his family's Vermont farm. There he observed the tenacity with which those native fungi clung to trees and wondered if there might be a practical use for such properties. He would call upon that memory years later when, in an RPI design innovation course, he and roommate McIntyre were assigned to develop a creative way of making glue. The approach they settled on is the technological basis for Ecovative's rapid growth today.

It all stems from the mycological magic that happens when agricultural byproducts such as seed husks and plant stocks come together in the dark with mycelium – the thread-like networks that support the growth of mushrooms. Neither plant nor animal, mycelium resides underground as a sometimes vast tangle of wispy filaments. It thrives as nature's top recycler, working over millennia to renew forests by reducing mighty trees into so much Bark-o-Mulch.

Ecovative's technology harnesses that bioprocessing might to transform organic crop wastes and other renewable additives into useful materials. The company's patented process exposes these low-value by-products to mycelial cells. Over the course of a week, the cells digest the plant material and bind the residual fibers and particles within a rigid resin matrix. The lightweight end-material can be grown into any customer-specified shape or size. With one square inch of Ecovative's material containing eight miles of mycelium fiber, its advantageous physical properties extend throughout the finished shape. Controlling the density, texture, strength, temperature tolerance, or appearance of the end material is a matter of tweaking the recipe.

The process consumes little power or personnel time. It occurs at room temperature and without the need for light. A well-timed dose of heat and hydrogen peroxide freezes growth before the mycelium can sprout reproductive mushroom fruit. There's no threat of customer exposure to spores or fungi that could trigger allergies or contaminate a building.

The company's flagship products are Eco-cradle, a protective packaging material, and Greensulate, a renewable, flame-resistant approach to panel insulation. Both are marketed as lightweight, biodegradable alternatives to polystyrene foam. In June 2012, Evocative named Sealed Air Corp. (Elmwood Park, NJ) as its exclusive North American licensee for protective packaging products, promising dramatically increased market penetration. Looking ahead, the company is developing biocomposite technologies for replacing dense manufactured materials such as particle board with renewable fungus-based alternatives, and is working with the automotive industry to produce strong, lightweight structural components.

"In only five years, the company has grown to more than 45 employees, including engineers, research technicians, mycologists, biologists, biochemists, production technicians, and management," said spokesperson Kristen Renaud. "We're constantly expanding and are still in the growth and hiring process."

Illustrating the moxie that earned him a 2012 Screw Business as Usual Award from billionaire sustainability advocate Sir Richard Branson, Bayer said, "Do not consider feasibility when creating, only imagine the optimal. Coupling creativity and feasibility leads to incrementalism and mediocrity."

That approach earned Bayer and McIntyre's company instant notoriety, not only for its technology but also for the founders' poster-boy embodiment of university tech-transfer at its most successful.

Do not consider feasibility when creating, only imagine the optimal. Coupling creativity and feasibility leads to incrementalism and mediocrity.Eben Bayer, CEO, Ecovative Design