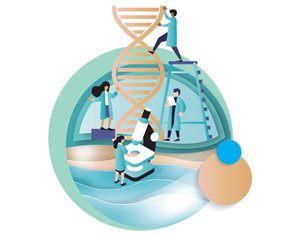 Advanced Manufacturing Building Equipment Contractors Chemical and Pharmaceutical Manufacturing Medical Equipment and Device Manufacturing Oil and Gas Extraction Robotics
Excessive or uncontrolled internal bleeding is a common and critical condition that can be caused by a number of conditions. Trauma-related injuries, for instance, produce inflammation and ulcerations, and cardiac patients are at risk because preventive medications reduce coagulation. Whatever the case, stopping or controlling hemorrhaging is crucial and often difficult.

Researchers at the Terasaki Institute in Los Angeles are reporting positive results in stopping hemorrhaging using visible hydrogels. Current techniques to treat internal bleeding use solid or liquid blocking agents, but both present difficulties. Hydrogels may remedy that.

In addition to having superior biocompatibility and tunable elastic and mechanical properties, hydrogels also exhibit sheer-thinning capabilities – the ability to deform upon injection and then quickly self-recover and mold itself to fit the desired space; this allows delivery to be made using standard catheters without specialized equipment. Silicate nanoplatelet discs were mixed into the hydrogel to mimic the clotting ability of platelet cells, and the resultant composite proved to be highly effective at sealing off damaged veins, researchers reported in a blog.

Editor's Pick: Bioengineering Blog: Preparing for a Career as a Simulation Engineer in Medical Devices

One of the most common current treatments is using braided platinum or stainless steel coils that are placed into blood vessels through special catheters. The coils can be of various sizes and lengths but the procedure requires intensive training. Often, difficulties arise when the coils compact or move away from the area. In such cases the procedure must be repeated. That is also the case if multiple coils need to be inserted and placed.

Liquid materials can leak during injections, impacting proper placement. Both procedures have the potential to add time and raise costs and neither can be accurately viewed through imaging.
Terasaki researchers previously published their successful use of hydrogels in controlling internal bleeding. Now they report that Terasaki and Mayo Clinic researchers added imaging particles of tantalum, a biocompatible metal, to the hydrogel that allows a clinician to view the procedure and its effect in real time.

They tested various sizes and quantities of the particle to determine the optimum mixture, and found one that did not affect the mechanical properties of the hydrogel formula. The tantalum particles dispersed properly into the hydrogel and retained sterility.

Taking their work a step further, researchers sought to perform hemorrhage control experiments using arteries, something they noted has not been done before. Using pigs, they were presented with higher blood flow and pressure combined with a variation in size and fragility not encountered in lab experiments.

They reported positive results with the tantalum-laced hydrogel, creating an effective seal against bleeding the arteries. The procedure also was some 40 times faster than using coils and the arterial block proved stable and durable over a four-week period. It degraded naturally and the block was replaced by repair of the blood vessel’s connective tissue.

The tantalum is eliminated from the system through urination. But its position in the hydrogel allowed researchers to see its application and monitor performance clearly and in real time using CT, X-ray fluoroscopy and ultrasound systems.

The team also successfully tested the reversibility of the block’s placement, using an aspirational catheter. They also successfully applied the hydrogel to coils already placed in blood vessels that were not performing properly.

“The experimental results that were observed in our tantalum-loaded gel clearly demonstrate its effectiveness and versatility,” said HanJun Kim, a member of the Terasaki Institute’s team. “We were able to meet our goals of being able to visualize and accurately place a stable block in an arterial vessel to rapidly treat uncontrolled intravascular hemorrhage.”