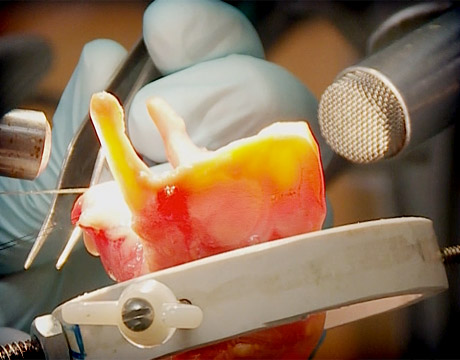 Most of us take for granted our ability to speak—this is not the case for about 20 million Americans who suffer from voice impairments. These often result from damage to the vocal-cord mucosae, the specialized folded tissues that vibrate as air moves over them, creating sound. Although some medical treatments are available: surgery, voice therapy, or injections of collagen or other materials, the results are generally unsatisfactory.

Now, however, researchers at the University of Wisconsin in Madison have succeeded in growing functional vocal-cord tissue in the laboratory, a major step toward developing better treatments for people with voice disorders.

“Most people inherently identify themselves and others by the sound of their voices, can recognize a familiar voice, and can pick up on others' emotion and intent based on the tone of their voice,” says Dr. Nathan Welham, associate professor in the Division of Otolaryngology-Head and Neck Surgery at the UW School of Medicine, who led the research team. “Voice is part of who we are. Given this, the idea that a voice can be potentially regenerated or replaced in someone with voice difficulty is a fascinating and hopeful thing.”

Vocal cords are made up of special tissue that is flexible enough to vibrate, yet strong enough to bang together hundreds of times per second. “It’s an exquisite system and a hard thing to replicate,” says Welham.

These are the only tissues in the body that are subject to high-frequency oscillation (at rates exceeding 1,000 Hz for a soprano when singing, or 200-300 Hz for the rest of us most of the time) and repeated tissue collision with associated impact and shear stresses. “Despite this, the tissues are actually quite delicate and have a low viscous modulus, so low, in fact, that traveling waves propagate across the tissue surface during voice production,” says Welham. “We had to consider all of these things when engineering a new tissue.”

The research team isolated, purified, and grew cells from mucosa tissue harvested from a cadaver and the larynxes removed from four patients. The cells were then transferred to a 3-D collagen scaffold, similar to the approach used to generate artificial skin in the laboratory. In about two weeks the cells had formed a strong, pliable, connective tissue with the same basic structure as vocal-cord tissue, including viscosity and elasticity. Physical testing showed that the epithelial cells had also begun to form an immature basement membrane, which helps create a barrier against pathogens and irritants in the airway.

“The cells are effectively talking to each other and producing the structural proteins that make this special tissue capable of vibration,” says Brian Frey, a UW-Madison associate scientist in chemistry involved in the research.

The bioengineered tissue was then transplanted onto one side of larynges that had been removed from cadaver dogs and attached to artificial wind pipes. When humidified air was blown through the larynges, a humming sound resulted. High-speed digital imaging showed the engineered mucosa vibrating like the native tissue on the other side of the larynges.

Finally, the researchers tested the biocompatibility of the tissue in mice that had been engineered to have human immune systems. The tissue grew and was not rejected. “It seems the engineered vocal-cord tissue is immune-privileged, meaning that it doesn’t set off a host immune reaction,” Welham says.

“We hoped for a good outcome, but were shocked at how well the engineered tissue created with human vocal fold primary cells performed,” says Welham. “These cells, originally exposed to the biomechanical environment of vocal folds when inside the body, seemed ideally suited to recapitulate the structure and function when used to engineer a replacement tissue.”

One disappointment was that the bioengineered vocal-cord tissue’s fiber structure was less complex than adult vocal cords. However, it also takes human vocal cords about 13 years to fully develop.

Much more research is required before bioengineered vocal-cord tissue will be ready for human testing. Welham’s proof-of-principle study is a “robust benchmark” in the possible use of vocal-cord tissue as a practical therapy option for patients with severe vocal fold diseases who would benefit from a complete mucosal replacement. “Getting to this point, however, will require substantially more safety and efficacy testing, as well as FDA approval,” concludes Welham.

For Further Discussion
The idea that a voice can be potentially regenerated or replaced in someone with voice difficulty is a fascinating and hopeful thing.Dr. Nathan Welham, UW School of Medicine