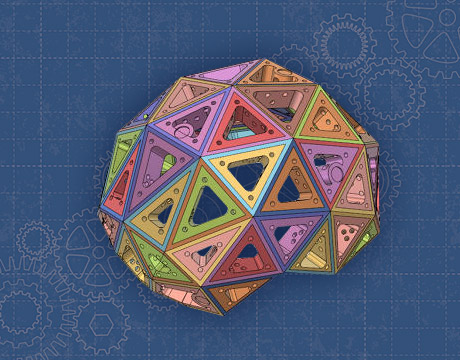 A new bike helmet is grown from mushrooms and custom-shaped into a dome the exact shape of a user's skull. Helmet image: Philippe Videau / Autodesk

The bike helmet has evolved over the years from an item used by serious cyclists to something you see practically everywhere. But there have been a number of complaints that have gone with this bulky safety gear. Though there may be limitations to what you can do for “helmet hair,” the lugging of a cumbersome helmet throughout the day may have an answer down the road.

Philippe Videau was in his final year as an aerospace engineering student at UCLA when an internship at Autodesk, a company highly focused on software, allowed him a chance to do far more than glorified paper shuffling. With six interns assigned to see what the company’s software could do, three branched off to work on a bike helmet, one that might even fit into a smaller bag, taking up a fraction of the usual required space. The key word? Mushroom.

The team used mycelium, a part of a mushroom, and this molding material would allow for a helmet to be molded according to a rider’s head. It would also be foldable.

“You get a kit and ultimately activate the mushroom by breaking apart a mixture and over weeks you get this foam-like material and even have to cure it in an oven to stop it from growing,” he says. As far as the actual shape of the helmet, they did some testing on growing the mycelium similar to a half soccer ball shape. “It was pretty heavy because it was 3D printed with a heavier plastic but could be printed on a much lighter plastic—think about something like plastics from a MakerBot,” Videau says.

The prototype was a very positive result for Videau, taking up between 40% and 50% less space, he says. “It’s almost like you can crumple it up and it will be at the bottom of your backpack,” he says. “If you take a helmet based on your head geometry then it will be more comfortable because often times people buy a helmet either too big or too small. The mycelium is grown in a mold and you get a 3D model out of it and make it into a mold. You can scan your head with a 3D scanner or just take your smartphone to take 30 to 40 pictures for the process of photogrammetry.”

Videau also points out that mycelium isn’t just good for making space in your bag but for saving landfill space as well. “Much of the material for bike helmets isn’t great for the environment,” he says. “This material is biodegradable.” Videau is hopeful that the helmet will keep moving forward but he already takes with him what he found to be a tremendous experience. “Biking is something so many people grow up with and it’s fun to take on the challenge of a common problem,” he says. “Why do you need to just continue to complain about having a bulky helmet? It’s fun to actually do something about it.”

For Further Discussion
Why do you need to just continue to complain about having a bulky helmet? It’s fun to actually do something about it. Philippe Videau, Autodesk