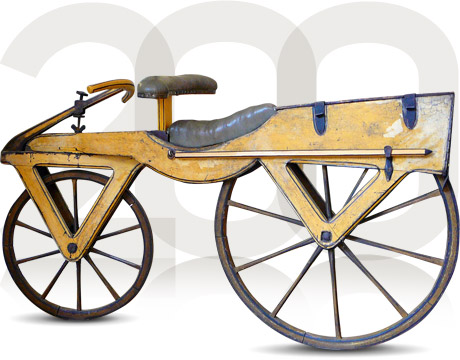 The two-wheeler turns 200 in 2017. In June 1817, German inventor Baron Karl von Drais rode his new laufmaschine (running machine) through the countryside and into history as the precursor to the modern bicycle. That quirky conveyance, which poet John Keats dismissed as “the nothing of the day,” is going strong two centuries later. Today’s bike makers are exploring the frontiers of engineering and materials science to meet a growing demand for customized bikes. So as we look back at the bicycle’s birth, it’s worth a glimpse at modern innovations that channel Drais’ vision into bikes that meet today’s needs.

The first two-wheeled bike was born against the backdrop of a global climatological catastrophe known as the Year Without a Summer. In 1815, a massive eruption of the volcanic Mount Tambora in the Dutch East Indies triggered a dramatic cooling effect across the Northern Hemisphere. Germany was particularly hard-hit, with widespread famine due to crop failures and livestock deaths. Horses – the era’s only means of ground transportation – grew scarce. As a civic-minded inventor, Drais took on the challenge to create a mechanical people-moving substitute for the horse.

Patented in 1818, the original laufmaschine was built on a straight wooden frame weighing in at a cumbersome 50 pounds. It had most of the elements used in modern bikes: two in-line wheels, handlebar steering, and a saddle to support the rider. The key missing feature: pedal-powered rotary cranks, were still decades away. Instead, the rider would straddle the low-slung bike frame with feet on the ground, pushing the bike forward with walking or running strides. It’s the same principle behind the pint-sized balance bikes that help today’s children learn to ride a two-wheeler without training wheels.

Every Drais machine was a custom job, made to measure for each customer’s height and stride. Other builders would soon fine-tune the design, introducing serpentine frames that made room for larger wheels, and adjustable seat height to reduce the need for customization. As the machines improved, their popularity grew rapidly across Europe. The vehicle became known variously as the draisine (or in France, draisienne), the swiftwalker, the hobby horse, or the velocipede – which became a more generic term for any multi-wheeled human-powered vehicle. In London, an epicenter of the brief velocipede craze, it was a favorite affectation among a class of status-seeking, style-conscious men of leisure known as dandies – hence its most popular nickname, the dandy horse. Eschewing the rutted, dirty city streets for the smooth sidewalks, the self-entitled dandies and their unwieldy horses caused mayhem among pedestrians. A rash of collisions prompted tough ridership restrictions in several cities, marking the beginning of the end of the dandy horse’s brief reign by 1819.

Fast forward 200 years. People’s love affair with the bike is as strong as ever. And just as in Karl Drais’ time, global, economic, and societal events still fan that passion. Many cyclists today ride not only to reach a destination but to make a statement of their values – whether it’s personal fitness, sustainability, adventure, or simply a desire to save on gas. “Bicycles are sold for the possibilities they represent to us,” says Dwan Shepard, president of Co-Motion Cycles, Eugene, OR, a 30-year-old manufacturer based in the heart of bike-crazy Oregon. Shepard says high-end bikes are no longer sold simply to would-be Tour de France competitors but rather to people who want to take the road less traveled – be it to work, to a mountain campsite, or along the local bike path. “It doesn’t take incredible athleticism,” he says. “You just need a little time, a bike that is well-appointed for the task, and some determination. There are some superb bikes and equipment being made to make these new ideas for cycling easier and more fun.”

For top-end bikes, riders look for excellent strength-to-weight ratio, superb road feel, and a bit of personal flair – and customization is key. The size and complexity of bicycle components, and the exotic materials often used in their construction, has thus far limited the industry’s use of 3D printing. But at least in key facets of the manufacturing process that’s likely to change, Shepard says. “3D printing now seems to be on the cusp of opening up possibilities beyond anything you and I might have imagined even 10 minutes ago, and I find that amazing," he says."It certainly has already been a very powerful tool for rapid prototyping, and that’s where I think it will continue to have its biggest impact.”

At least experimentally, bike makers and 3D printing companies have leveraged carbon fiber and titanium printing advances to produce some groundbreaking bikes and components. Britain’s Empire Cycles collaborated with Renishaw to produce what it hailed as the world’s first all-titanium mountain bike. The VRZ-2 track bike designed by Ralf Holleis artfully combines fancy 3D printed titanium lugs with carbon fiber tubes. And, in a nod to Karl Dais, MakerBot has created a fully functional print-at-home version of a dandy horse for kids using its PLA filaments. “No single material can be called the best for bicycles,” Shepard says. “Millions of people are certain that they must have a carbon fiber bike. There are some wonderful carbon fiber bikes, of course. But a builder/manufacturer can do a poor job with the best material, or a superb job with the very worst. The point is, we've got to look beyond the material and look for good design and execution.”

A builder/manufacturer can do a poor job with the best material, or a superb job with the very worst. The point is, we've got to look beyond the material and look for good design and execution.Dwan Shepard, Co-Motion Cycles