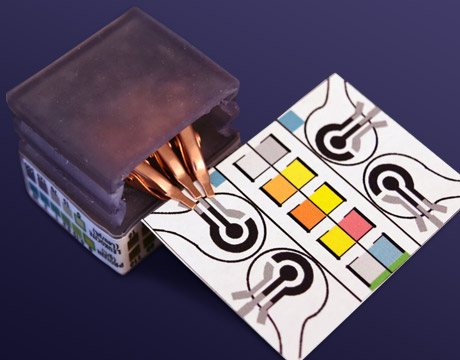 Beyond the Litmus Test

The world’s sick do not always have access to accurate diagnostic tools or the medical personnel capable of reading them. Unfortunately, it’s nearly impossible to bring physical labs and the people needed to run them to every corner of the globe. Ramses Martinez, a professor of industrial and biomedical engineering at Purdue University, wanted to fix that problem.

“What we needed was to find a very low-cost substrate that would be widely available, and be able to be produced by any country,” he says. The material that met these requirements was paper and he and his lab soon got to work creating a paper lab.

The “lab” is rectangle of paper small enough to fit into the palm of a hand. It has four test areas where healthcare workers or others in the field can place samples, such as blood or saliva. The whole device can be plugged into an inexpensive electronic device called a potentiostat that includes a chip that can analyze samples. The results change the color of ten squares on the paper, similar to how litmus paper works. The whole thing can be run by tapping it, thanks to a friction-powered sheet attached the paper. Currently the lab can test for liver and kidney problems, malnutrition, or anemia. Eventually the paper lab will be able to test for malaria, yellow fever, dengue fever, hepatitis, and HIV.

Martinez and his colleagues found that paper alone had some problems. Places near the equatorial belt were too humid—water from the atmosphere would be absorbed by the paper and would ruin its diagnostic abilities. To overcome the issue, Martinez added a Teflon-like coating to areas of the paper that needed to stay dry. The non-coated areas become micro channels to bring a sample to the tiny reservoirs for testing.

The paper lab, however, still needed a small amount of energy to power the chip with the algorithms. Martinez created a thin triboelectric generator, which creates electricity through friction, and coupled it with the paper lab. Researchers simply put the lab in their coat or pant pocket and begin walking to charge it.

“If the system is completely discharged you just need to tap it for two or the minutes, then you are ready to run a test,” says Martinez, describing how little friction it takes for the generator to create electricity.

Even a perfectly operating microneeds to be read properly to be effective. But the changes of color on the paper are not always obvious to the human eye. “Humans are not good at perceiving color in an accurate way,” Martinez says.

To fix that, researchers created an app and an algorithm that could do the work. “You can take a picture with your phone, and then the algorithm locates the device. And since it knows the paper is white, it does color correction and removes any artifacts from the picture,” Martinez says. “You can get a much better result than human brains when they have to give an interpretation of what something looks like.”

With the self-powered, paper-based electrochemical devices, or SPEDs, already in working order, the next step is to get them into he hands of early responders. The only hurdle to making that happen is getting FDA approval, usually a time consuming process.

Once the SPED has become an established tool, hospitals in both the developing and the developed world stand to benefit. Anyone who is sick, but not sure they need to head to the emergency room could use a SPED to figure out what’s wrong, alleviating demands on hospitals. After the paper lab has been use, it can be easily burned, obviating the need for a biohazard bin.

If all goes as planned for Martinez and his team, a tiny piece of paper could be responsible for diagnosing some of the world’s most life-threatening diseases.

What we needed was to find a very low cost substrate that would be widely available, and be able to be produced by any country.Prof. Ramses Martinez, Purdue University