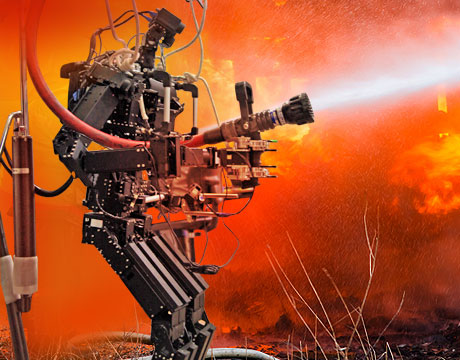 Fire seemingly comes from all sides in a smoky building. A figure moves forward, hose at the ready. But there isn’t a human in sight.

Firefighters have long been some of the most heroic members of society, but what if they didn’t have to find themselves in quite as many perilous situations? A robot firefighter just might one day be able to step in and save lives. For now, the technology is being tested at sea.

“Around 2010 we had talked with the Navy about trying to help them with dealing with the hazard of fires on ships,” says Brian Lattimer, a professor in the department of mechanical engineering at Virginia Tech and a member of the team. “We came up with the concept of a humanoid robot onboard because they might not just help with fires but could also maybe be used for watch or assisting sailors with inspection.”

He says the Navy was excited but the idea of a humanoid then was a high-risk, high-reward proposition. “There weren’t that many humanoids around that could do these types of actions, but, with a potential payoff in ten to twenty years, they decided it was a good investment,” he says.

The team began by rethinking how to make the robot, especially considering the problems in moving around on a ship. “There are many things they can run into in this kind of confined space and we needed a strategy for the robot that would allow it to balance on its own,” he says. “We developed a whole body controller for balance and to respond to external disturbance.”

The body controller was a combination of redesigning actuators used on robots and software used for locomotion, he says. “It isn’t rigid like some other robots you might see. The actuators have springs, allowing it to more easily control its balance.” The whole body controller compensates for any kick from the fire hose.

They also wanted a robot to be able to keep its range-finding and perception during a fire event. “When you put water into fire you have to see through steam and smoke,” he says. “It was desirable to have a robot autonomously locate fires and put them out with water.” They looked at range finders on the market and put them in different levels of fire and smoke to see how they behaved.” Ultimately, LIDAR was chosen.

Testing it on the former USS Shadwell, the robot walked into a compartment containing fire and worked with a firefighter to grab a hand line. The situation was suppressed successfully.

“Potentially, this could have humanoid robots go into spaces to size up fires before having to put firefighters there,” he says. “They could also be used for other platforms: ground vehicles or possibly aerial vehicles to assist in a wildland fire even.”

At present, they have developed two humanoid robots, both 5 foot 10 and weighing 145 lbs and 165 lbs, respectively.

For Further Discussion
When you put water into fire you have to see through steam and smoke. It was desirable to have a robot autonomously locate fires and put them out with water.Prof. Brian Lattimer, Virginia Tech University