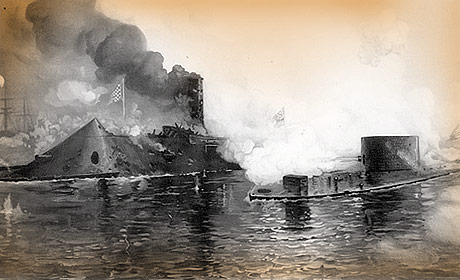 Battle of the Ironclads: John Ericsson and the USS Monitor

Few chapters in Civil War history capture the imagination of engineers as much as the legendary naval battle between the USS. Monitor and the CSS. Virginia (nee, Merrimac) at Hampton Roads, Virginia, on March 9, 1862.

Most of that interest is focused on the revolutionary Monitor and its iconoclastic designer, John Ericsson (whose bust sits in the lobby of the ASME's New York headquarters to this day). Both the ship and the man were totally unlike anything else the world had seen. Yet as different as they were from the ships and men of their era, it is easy to see today that the bombastic engineer and his ironclad creation had a lot in common.

The ship: The Monitor was not the first ironclad—the basic idea of armored batteries goes back to the third century B.C. But this "cheesebox on a shingle" was a complete departure from the prior 300 years of battleship design. From its rotating gun turret to its water-line-hugging deck to its below-deck steam engine to its subaquatic toilet-flushing technology, the ship boasted more than 40 patentable innovations.

The engineer: Ericsson was largely self-taught in engineering, but his sharp intellect and natural gifts for technical drawing and machine design carried him far. By the time he came to the U.S. in 1839, he was already a bona fide star for developing the marine screw propeller, the caloric engine, and other revolutionary technologies.

The ship: The Virginia was a captured Union vessel originally known as the Merrimac, reconfigured as an ironclad battery. Traditional wooden ships of the time were no match for the Virginia, and the Union was terrified of the treat she posed to their naval blockade of the South. But the smaller, lighter, and far more nimble Monitor could easily outmaneuver the hulking ship, withstand everything she could shoot at her, and fire back with wicked precision from virtually any angle. Just as importantly, the streamlined Monitor could also retreat to the safety of shallow waters inaccessible to the Virginia, where wounded could be treated, damage repaired, and ammunition replenished without fear of pursuit.

The engineer: At 5 feet 7 inches, Ericsson was a compact, robust man who worked out with barbells and watched his diet. He attributed his breakneck work style to his fresh-air fitness routine involving daily late-night walks around Manhattan regardless of the weather.

The ship: The famous battle at Hampton Roads was inconclusive. Neither ships' guns could penetrate the other's thick iron skins. But from a strategic perspective, the mere existence of the Monitor —and the 35 other Union ships later built on the same basic design during the war—was enough to ensure the integrity of the Union's blockade. At Hampton Roads, the Confederacy lost its last hope of victory by losing all chance of foreign intervention on its behalf.

Despite several opportunities for a rematch, the Monitor's orders were to refuse engagement with the Virginia unless she attempted to sail out of Chesapeake Bay into open seas. The Virginia's crew taunted their Union adversaries for supposed cowardice, but the Monitor crew followed orders and refused to engage, conserving vital resources that would have been squandered in another inconclusive skirmish. Without firing a shot, the Monitor achieved its mission to secure the blockade.

The engineer: Ericsson's Type A personality did not endear him to the Navy Department. "He sees what other men do not, and cannot see plain things—he is a genius to be used, a man of sense to be followed—and yet so cranky and opinionated that doubt at his conclusions is an insult, or a proof of enmity, a gross stupidity unworthy of thought," said Navy Captain John Rodgers.

Previous expensive failures in steam battleship design made Ericsson persona non grata in some Washington, DC circles. Although his partners had the necessary clout to ensure Ericsson ultimately won a contract to build his Monitor, the terms of the deal were extraordinarily one-sided in the government's favor. Ericsson had no choice but to agree to deliver a finished, fully tested ironclad in just 100 days, and to guarantee the government a full refund if performance fell short of its expectations in any way.

Ericsson was as determined to meet his contractual obligations as he was confident in his designs. Not a fan of compromise, Ericsson nonetheless accepted several critical design changes in order to deliver the ship on schedule. He had specified that the turret be built from two layers of four-inch iron plate, but learned it would take two months to retool the milling machinery to produce plating that thick. He agreed to go with eight one-inch iron layers instead.

He first envisioned a hemispherical turret instead of the odd-looking cheesebox he ultimately agreed to for the sake of speed and simplicity. He designed a totally new form of artillery—a gun in which shot was fired not by explosives but by steam power. But for the sake of expedience, he went with two 11-inch smoothbore Dahlgrens instead. And his original plans called for another novel weapons system called hydrostatic javelins—the earliest torpedoes—but that idea was also left on the drawing board. Knowing that the Virginia was under construction at the same time in Hampton Roads, Ericsson was wise enough not to let his ego stand in the way of getting the job done.

Many of Ericsson's history-making creations, including the turret, guns and other vital components of the wrecked Monitor, have been salvaged and are under restoration by the National Oceanographic and Atmospheric Administration. These artifacts are on display for people who want to learn more about the iron-willed man who changed the course of history with his ironclad ships.

He sees what other men do not, and cannot see plain thing—he is a genius to be used, a man of sense to be followed.Navy Captain John Rodgers, on John Ericsson