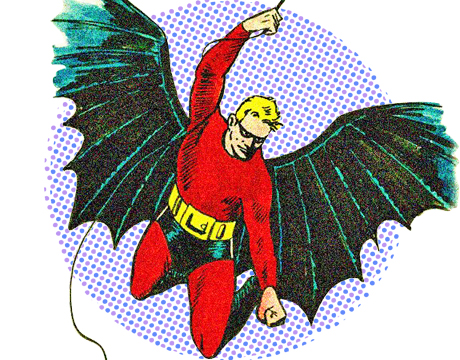 Since his debut 75 years ago in the pages of the venerated Detective Comics #27, Batman has spent billions of Bruce Wayne’s dollars developing a DARPA-worthy stockpile of improbably sophisticated weapons, vehicles, and computer systems. To advance his obsessive quest to avenge his parents’ violent slayings in a back-alley stick-up, he has given himself mechanized batlike abilities: night vision, long-range hearing, and gliding that offset his lack of in-born superpowers. But on the Dark Knight’s dodranscentennial, the question must be asked: Is he over-compensating?

No one would accuse today’s Batman of going soft. His portrayals in recent big-box-office films have intensified the dark aura of the character. But looking back on his gritty 1939 debut we see an even more unhinged hero who relied primarily on his fists, a scary costume, and the huge chip on his shoulder. The contents of Batman’s prototype utility belt seem almost quaint today. Yet in the context of the pre-war world before transistors, lasers, and high-performance materials, it’s clear that creators Bob Kane and Bill Finger were inspired by the latest advances in science and engineering – in some cases even imagining technologies that are only now taking shape.

Beyond indulgence in fanboy nostalgia, there is real value in exploring Batman’s relationship with technologies both real and fanciful, says science writer Agnieszka Biskup. Through books like Batman Science: The Real-World Science Behind Batman’s Gear (2014, Capstone Young Readers, co-written with Tammy Enz), Biskup shows kids that there are no limits to the possibilities through careers in science and engineering.

“I hope my readers will be inspired to think about how things work, how ideas can be turned into reality, and how it’s possible to make a career in science and technology,” she says. “I want them to be inspired to think beyond the ordinary and not be afraid of the impossible.”

She cites a number of real technologies that were likely inspired by sci-fi or comic strips. Star Trek gave rise to the mobile phone. The taser, short for “Thomas A. Swift’s Electric Rifle,” took its lead from the serialized adventures of teen inventor Tom Swift. “I’m not saying that all engineers and scientists are fans, but those who are have said how sci-fi inspired them to go into real science fields,” she notes.

These five items from Batman’s earliest utility belt have remained among his go-to weapons for 75 years. They were state-of-the-art at the time and they have kept up with the times as technology evolved, perhaps inspiring today’s young people to discover their true identities as budding scientists or engineers.

Although it wasn’t mentioned by name, the utility belt is recognizable in Batman’s very first appearance, complete with impossibly small compartments to hold his first gear. However, in the debut story the belt appears mainly to have kept his trunks up. Batman nabbed the bad guy with a common monkey wrench and a cheap sock to the jaw that knocked his foe into an open vat of acid.

The utility belt has been described as comprising 10 cartridges or pockets attached to the outside of the belt and hidden compartments on the reverse side where batarangs are stashed. Some early depictions built a few gimmicks like a two-way radio and a camera right into the belt itself.

We’ve established that Batman was not above a cheap shot when necessary to bring a fiend to justice, but some of his tactics might be considered shocking by today’s standards. When a sucker punch or head butt wouldn’t suffice, Batman kept a range of chemical and biological weapons at his fingertips. From the biopathogen he carried in the event he needed to fain his own death, to the plastique and thermite fire bombs he rained down on crooks on the lamb, to the gas and smoke grenades used to evade capture, the Caped Crusader pushed the limits of the Geneva Convention. But the most devious WMD in his belt was reserved for his good friend and Justice League ally Superman. In the unlikely event the event the Man of Steel went rogue, Batman took it upon himself to keep a small stash of kryptonite on hand at all times.

Batman’s oldest and most versatile fighting tool – the batarang – is a prime example of a weapon that keeps coming back as new design and engineering methods evolve. Inspired by some of the oldest hunting and fighting tools on the planet, Batman’s batarangs incorporate new knowledge in aerodynamic design for ultra-precise throwing and return performance. Engineered composite materials create an ultra-light and virtually indestructible throwing weapon, not unlike the shurikens favored by Japanese samurai. And in combination with the equally venerable batrope and micromachined grapnel launcher, the batarang has long enabled Batman to scale and swing among Gotham City’s skyscrapers en route to a crime.

Biskup cites the batarang’s grapple hook set-up as perhaps the prime example of an emerging real-life technology that Batman had perfected decades earlier. In the book, she profiles real devices such as a compressed air launcher capable of sending a titanium hook and Kevlar line some 120 feet into the air (T-PLS, Digital Force Technologies, San Diego, CA) and a lightweight battery-powered rope ascender developed at MIT that pulls a person and his or her gear at about 10 feet per second.

The Batrope deserves recognition of its own, if for no other reason than it kept Batman from having to take the elevator to his foes’ rooftop lairs. The earliest batrope was made of silk, the strongest fiber in common use in the days before nylon and its synthetic cousins. Whatever materials he engineered into his batropes over the years, Batman somehow incorporated the properties of both dynamic and static rope construction – giving him the bounce needed to absorb shocks from free falls while providing durability for tough rappelling and hauling jobs.

Without the power of flight and unwilling to rely on public transportation to reach the crime scene, Batman has built a fleet of land, sea, and space vehicles that add dramatically to his firepower. Originally he used a fast but no-frills roadster from Bruce Wayne’s garage. Not until 1940 did readers get an eyeful of the first stylized, tricked-out version of a Batmobile. The Batplane – or Bat Gyro as he first called it – was the first of the many high-tech conveyances bearing the “Bat” prefix.

The auto-gyro – a hybrid of a fixed-wing aircraft and the helicopters that would soon appear – was a mainstay in the world of pulp crime fiction. Invented in 1920 by Spanish engineer Juan de la Cierva, the gyroplane incorporated a non-motorized top rotor that used air currents to augment the conventional airplane engine and front prop. With after-market rocket tubes affixed to the wings, the odd craft kept one step ahead of the Joker’s own increasingly sophisticated bag of technological tricks.

When it comes to embodying the early Batman’s brooding, vengeful persona, nothing in the utility belt can match the piece he wore in his first, bloody year of crime fighting. Yes, Batman packed heat early on in his obsessive quest for justice. Eventually, the character’s staunch anti-gun stance became part of his mystique, but in those early days, it was his ultimate means of justice. Quickly phased out of the storyline after Kane’s editors complained, his sidearm was replaced with a perky sidekick, Robin the Boy Wonder, and the character lost a significant degree of his trademark darkness.

Although not explicitly identified by make and model, Batman’s gun appears to have been a Colt .45 semiautomatic, which was already familiar to readers of the pulp detective “The Shadow,” who packed a pair. The classic M1911 model appeared in 1911, with a John Browning-designed .45 ammo cartridge fed by a seven-round detachable magazine inserted into the grip. The Colt’s sleek, cold-blue-steel design was perfect for Batman’s image, but was soon traded for the higher-tech, lower-lethality items in the utility belt.

For Further Discussion
I want (readers) to be inspired to think beyond the ordinary and not be afraid of the impossible.Agnieszka Biskup, Author