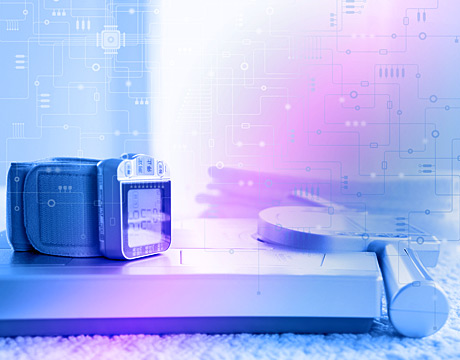 With funding from the National Institutes of Health, engineers and researchers at four universities are collaborating on the development of a system for measuring blood pressure using a more convenient approach than available now that will facilitate frequent feedback for monitoring at home or other locations, such as gyms.

According to NIH’s National Institute of Biomedical Imaging and Bioengineering (NIBIB), hypertension is responsible for approximately half of all deaths from stroke and heart disease and is the second leading cause of kidney failure. The condition goes untreated in one in three adults worldwide because effective screening, diagnosis, and management can be difficult using current technologies.

Studies have shown that more frequent readings over a longer period of time better represent a patient’s true blood pressure, but most cuffs for home use and methods at kiosks can be highly inaccurate, says biomedical engineer Omer Inan, assistant professor at Georgia Tech, one of the universities working on the project.

NIBIB is encouraging the development of new technologies for measuring blood pressure that are passive and convenient and eventually can automatically provide feedback. The goal is to create less expensive, less intrusive, and faster technologies that can be operated by untrained individuals in low-resource settings. An ideal system would be more convenient than a home cuff yet have the same accuracy as the professional cuff, Inan says.

The new approach developed by the engineering team, led by Michigan State University and also including the University of Maryland in addition to Inan’s lab, uses a standard off-the-shelf weighing scale retrofitted by changing the circuit to make it more sensitive and incorporates a footstrap with an array of optical sensors. These two devices take the two measurements required to determine pulse transit time, the time it takes for a pressure wave to travel along the walls of the arteries from the heart after it contracts to a distant part of the body.

Pulse transit time has been known about for a long time, said Inan, but obtaining the measurements when the blood first leaves the heart and when the pressure wave arrives at a peripheral point in the body, has been even more inconvenient than with a cuff, and not consistently accurate.

Ever since working on his Ph.D., Inan has been studying the ballistocardiogram signal: movements of the body in response to every heartbeat.

“Every time the heart pumps blood through the aorta, the body has a reactionary force and that’s the ballistocardiogram (BCG) signal,” he says.

“What I found in my Ph.D. work I am understanding better since this signal can be measured with high accuracy with a weighing scale,” he says. A scale shows about a 0.1 pound increase every time the heart ejects blood. “So you weigh one-tenth of a pound heavier every time your heart beats, and then one-tenth of a pound lighter as the blood changes direction through the aorta. It’s a phenomenon that’s been known about for over 100 years but has not been used in medicine because traditionally it required cumbersome, expensive and large setups [to measure]. In our work we have been measuring it with a scale that can be used in a home or locker room.”

That’s the starting measurement needed. The second signal required is when the pulse arrives at the foot, and that is measured with an array of optical sensors in a foot strap. “The time delay between them is what we then correlate to blood pressure,” Inan says.

Inan says some of the biggest challenges have been identifying which feature on the BCG signal they should use as the index of when the pulse starts since the BCG signal is not uniform in each person. Another challenge was the footstrap because of the “noise and interference” from muscles contracting in the feet trying to help stabilize a person who is standing.

“We had to do quite a bit of work on the construction of the footstrap. We found that the optical approach works the best, but it’s important to have an array of sensors on the top of the foot so that we can find the dorsal artery which gives us the highest signal level,” Inan says.

Although Inan is investigating universal calibration by just entering height, weight, and age for a calibration coefficient that would give blood pressure, this may prove difficult. Also under investigation are ways to obtain measurements using wearable devices, such as a skin patch.

By the end of the project, he also wants to have measurements from many more than the some 23 healthy subjects he has now. “We need to have much more data and from patients with hypertension as well as older people to get a better idea of the accuracy of our system in a broad population,” he points out. Nancy Giges is an independent writer.

For Further Discussion
In our work we have been measuring [BCG signal] with a scale that can be used in a home or locker room.Prof. Omer Inan, Georgia Tech