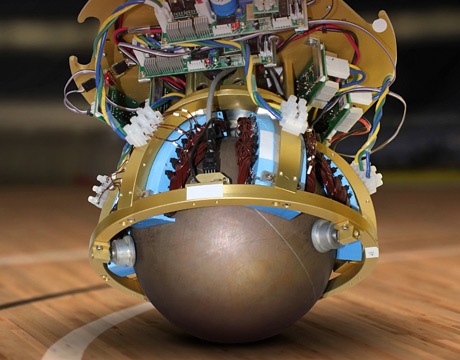 It all started 12 years ago with the ballbot, a robot with a tall, thin body that moves in any direction, responds to a slight push, and balances atop a sphere slightly smaller than a bowling ball.

Though the robot is perfectly suited to helping the elderly or disabled within their homes, researchers knew the rolling mechanism could be simplified to reduce maintenance and cut costs.

Ballbot inventor Ralph Hollis calls the ball-balancing design a new, fundamental method of locomotion for robots. Hollis and Masaaki Kumagai, a professor of engineering at Tohoku Gakuin University in Japan, designed SIMbot along with graduate students.

“Yet that ball-driving mechanism is rather complicated,” says Hollis, a professor at CMU’s Robotics Institute. “It uses five motors and there are belts and friction elements. So that’s where SIMbot comes in.”

Though SIMbot relies on a rolling mechanism similar to ballbot, it includes just one moving part: the ball.

“What we’ve been trying to do with ballbot for a long time is to show it can do anything any other mobile robot can do, but also do a lot more because of the balancing and the omnidirectional behavior,” Hollis says.

“We’ve shown it can roll at about two meters per second; faster than a person’s fast walk. And we can put arms on it so it can lead a person through a room, navigating while applying urging forces to the person while balancing,” he adds.

Balance is key, Hollis says. Should the person the robot leads stumble or change direction, the robot remains balanced and upright. That means it can lead and guide disabled people, such as those who are blind or have difficulty with mobility. The ballbot can also lean over to assist a person in rising from a chair, carry packages, place items on a tabletop, and carry items on a tray-like surface among other tasks.

But unlike ballbot’s complicated drive system, SIMbot has almost no mechanics. “Basically, SIMbot is a robot made up of a body and a ball,” Hollis says. “The frame is a copy of ballbot and we demonstrated that it could have performance similar to ballbot.”

What’s more, because of its mechanical simplicity, SIMbot requires less routine maintenance and is less likely to suffer mechanical failures says Michael Shomin, a Ph.D. student in robotics who is part of Hollis’s team.

The new motor can move the ball in any direction using only electronic controls. The rotor of the spherical induction motor is a machined, hollow iron ball with a copper shell. Current is induced in the ball with six laminated steel stators, each with three-phase wire windings.

“Belts that drive the rollers wear out and need to be replaced,” he says. “And when the belts are replaced, the system needs to be recalibrated.” The new motor’s solid-state system eliminates that type of maintenance.

Though SIMbot does move as fast as the ballbot, it uses twice as much power to function as does its mechanical counterpart.

Hollis and Kumagai intend to redesign the ball using different materials and making other design and software changes to improve motor efficiency. They also expect costs for the mechanically simple motor to fall in comparison with the ballbot motor.

The tall and skinny SIMbot can be just as helpful to people as Hollis expects the ballbot to be. Really, these types of robots are ideal human helpers, he says.

“They can’t get trapped in any cluttered space, they can go through narrow doorways. And if they run into something they can yield,” he says. “And with arms, they assist people mechanically. All that capability is currently in the ballbot and can be transferred to the SIMbot.”

Basically SIMbot is a robot made up of a body and a ball. The frame is a copy of ballbot and we demonstrated that it could have performance similar to ballbot.Prof. Ralph Hollis, CMU