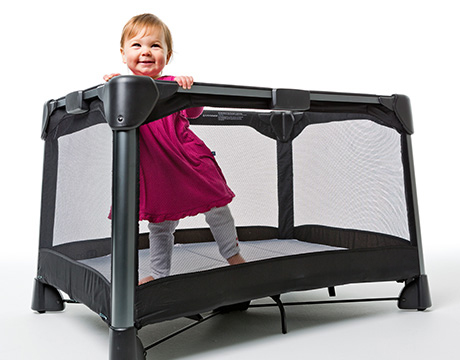 Mechanical engineer Henry Thorne didn’t have designs on entering the baby product business—but the clear need and numbers became obvious to him. As he says, there aren’t just millions of babies born every year, there are millions of gifts exchanged at the parties in honor of those babies.

Many of which, Thorne found, can be designed and produced better. Hence, he’s a co-founder of 4moms.

When you picture the struggles of trying to get a family outing together complete with baby equipment, it’s easy to see where a mechanical engineer can come in. Take 4moms’ origami stroller. With the concept of unfolding and folding with ease in mind, the designers prioritized getting in and out of the car and on your way as fast as possible with the comforts you want. It may seem simple to the eye but getting to the right design was a different story.

“We went through a number of potential designs, actually developing them pretty far,” Thorne says. “We had two strollers that compacted and were mechanically motorized at folding pretty well. None of them knocked our socks off though.”

He whittled the possible designs down by concentrating on aspects such as cost-effectiveness and compactness of folding.

They settled on the “origami” design, which maintained the concept of lightness, even down to the size of the main drive motor in the stroller being just a little bigger than a D cell battery, he says. The tubes are all aluminum, but Thorne said a stroller of theirs could be a candidate for carbon fiber or magnesium and that they’re at least thinking about it.

In the end, the origami, he says, is really a robot, with sensors taking data that are causing actuations through intelligence. Thorne even brings up similarities between the product and a car when you consider brakes, lights, and even cup holders.

Another invention Thorne worked on was the breeze playard, which can allow for a set-up on the go for playing or sleeping. Admittedly, he experienced his share of failure along the way. One worked but “made an awful smashing sound as you opened and closed it” while another also worked but was too heavy. The 74-bar linkage product produced today, he says, partly succeeds because of a design principle he believes in: tension is better than compression. Still, like the aforementioned origami, it took years from first concept to getting it on the market.

As far as future products he’s involved in, Thorne says look for one that automates installing a car seat to remove possible human error. Keeping in mind that the majority of car seats are installed incorrectly, the thought is not just to do it right but to remove a parent’s anxiety.

After all, parents sometimes need pacifying, too.

For Further Discussion
We went through a number of potential designs…We had two strollers that compacted and were mechanically motorized at folding pretty well. None of them knocked our socks off though.Henry Thorne, co-founder, 4moms

Video: Space Advancements in the 2010s