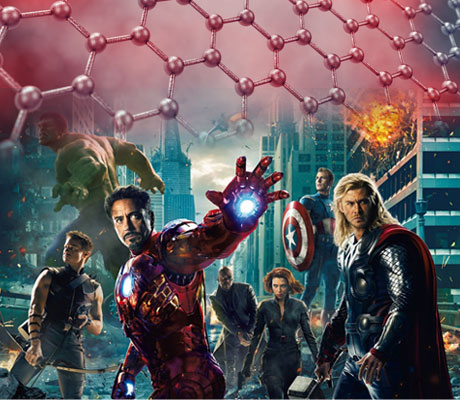 In their 2012 blockbuster film debut, the Avengers went head to head with gods and monsters and came out on top. They overcame personal demons and interpersonal differences to work as a team. But "Earth's mightiest heroes" pulled off an even greater feat – they won over the nerds.

The $220 million Marvel Studios invested in The Avengers seems to be paying off as the movie sizzles its way toward a billion dollars in box office receipts worldwide. Its dazzling special effects are helping to woo hard-to-convince technophiles, fan-boys, gear-heads, and actual engineers and scientists who seem willing to suspend disbelief for a couple hours of pure, old-fashioned "Wow."

Plausibility is a relative term in the Avengers' world, where time travel, cosmic awareness, and smashed city skylines are all part of a routine day at the office. In the movie, as well as in the comic book that inspired it, Marvel's creative team keeps the faith with discerning fans by tethering even the most far-out plot twists to realistic scientific concepts. With passionate fans eager for any opportunity to call out the slightest plot hole or continuity gap, script writers and special effects designers know they have virtually no room to gloss over the science. With The Avengers, they delivered the goods.

For the uninitiated, here is a quick review of a few technologies that keep the Avengers grounded in reality while they save the galaxy.

Had billionaire engineer/industrialist Tony Stark been less driven, his Iron Man armor would have remained the bulky, transistor-powered parody of a low-budget sci-fi robot suit. But Stark and his creators have kept his armor up to date, dreaming up new ways of making it lighter, stronger, more versatile, and easier to put on.

The full range of capabilities in Iron Man's armor transcends anything now in development of course. However, as Suveen Mathaudhu, a program manager in the materials science division of the U.S. Army Research Office recently told the Journal of Materials, the military is working with exoskeletons that can help soldiers carry 200 pounds of gear while running up to 10 miles per hour. So we're getting there.

Set aside for a moment the incredible techno-biography of Captain America, the First Avenger, who gained his superior strength and fighting skills from a dose of Super Soldier Serum. In terms of credible technologies, it's Cap's indestructible shield that captures the imagination of today's tech-savvy theater-goers. Fabricated from vibranium, a mysterious metal derived from ore found in an alien meteorite, the star-spangled disc is lightweight but indestructible. Better yet, the bigger beating it takes, the stronger it gets.

Certainly no known metal gets stronger with stress. But because we know that materials science has yielded incredible new metals, carbon nanofibers, ceramics, and high-performance polymer composites that produce light-weight, super-resilient objects for warfare, aviation, and sporting goods, we can accept that something like vibranium could exist.

Agent Nick Fury and his SHIELD agents travel the globe's hotspots in a full-scale aircraft carrier that not only can take off in flight from the ocean's surface but also make itself invisible to spying eyes.

In real life, invisibility technology–while still far from a practical tool–has come a long way. Some groups have used calcite or artificial materials to bend microwave energy around, and thereby conceal, a two-dimensional shape. Other approaches involve the use of mobile video cameras and small screens to project images of what's behind an object onto its front. Having proved the physics of invisibility, it's up to engineers to figure out how to make it work.

Of course, no one really believes that today's technology can produce a flying, invisible aircraft carrier, or an automated suit of impervious armor, or Hawkeye's quiver full of high-tech trick arrows. But in an era transformed by modern materials science, bioengineering, computer technology, and nanoscale fabrication, real science is helping even the biggest sticklers for technical accuracy suspend their disbelief and enjoy The Avengers.

In fact, in 2008, the National Academy of Sciences stepped in to to improve the way science and technology was depicted in popular culture. The NAS's Science & Entertainment Exchange was launched as a technical liaison between respected scientists and engineers and people in the entertainment industry.

"Our goal is to use the vehicle of popular entertainment media to deliver sometimes subtle but nevertheless powerful messages about science," said Marty Perreault, Exchange director. Perreault calls upon an advisory board of top-flight scientists, including multiple Nobel laureates, as well over 800 volunteer consultants in their database, to handle everything from individual fact checks to full-scale briefings.

The exchange has consulted on some 450 projects for television and the movies, with enough superhero fire power to demolish the Earth many times over. The group's brag sheet includes big-screen hits like Watchmen, Prometheus, Battleship, Green Lantern, and Tron, as well as Iron Man and Thor's solo adventures. They are actively recruiting engineers and other technology professionals to join the pool of unpaid consultants enlisted to answer questions, check facts, and provide detailed briefings for Hollywood clients.

"We want writers and directors to feel comfortable and to know exploring science will only open up the number of creative possibilities for their storytelling. Scientific theory is just so much better than what Hollywood can make up. It's amazing how often the truth is truly stranger than fiction," said Janet Zucker, a film producer and vice chair of the Exchange advisory board. "We have gotten to the point where audiences can be wowed by reality."

We have gotten to the point where audiences can be wowed by reality.Janet Zucker, producer and founding member of the Science and Entertainment Exchange at the National Academy of Sciences