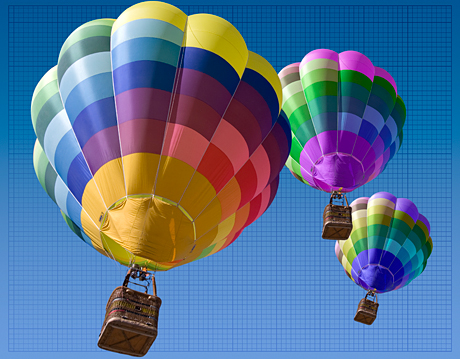 The Ascent of the Hot Air Balloon

When we think of humankind’s first forays into flight, two brothers come to mind, named Orville and Wilbur. However, it may be more appropriate to think of two other siblings from back in the 1700s: Jacques-Étienne Montgolfier and Joseph-Michel Montgolfier and their invention of 1783, the hot air balloon.

“The purpose of the fabrics is to contain the air,” says Andy Richardson, owner of hot air balloon manufacturer National Ballooning LTD in Albuquerque, New Mexico. “The balloon has a load building structure and the webbing works almost like an exoskeleton. When you’re designing balloons you take into account stressing of the fabric, the cables the balloon runs to, and the basket.”

The first balloon was made mostly out of silk and paper, he says, and was hand-stitched together, using smoke and wood fires to provide the heat but “only the heat on the ground was used and the ride was very short.”

Despite success centuries ago, it was only as recently as the 1960s that the hot air balloon truly became popular. “The U.S. government hired Ed Yost to see if he could create balloons for getting troops over the Iron Curtain. But the balloons could only be so quiet.” But while it may not have worked for military purposes, Yost didn’t lose the balloon itch. He helped form Raven Industries to make it a leisure sport and the hot air balloon is now known for that as well as being a leading source of marketing.

So how are the balloons created today?

“It used to be fire on the ground to get it going but that was replaced by propane,” Richardson says. “The burners are loosely modeled on the thrusters from the space shuttle.” The burners have coils and when you hit the blast on the burner, he says, it allows the propane to go out of the tank, through the hose, and into the burner. The propane goes to the top and runs down the bottom of the burner where the jets are. “It superheats the propane and gives you three times the amount of power if you just took raw propane and set it on fire,” he adds.

One helpful addition was the parachute valve added in the mid-1970s, which allows air to escape through the parachute for an easier landing. “It just pulls the parachute down from the webbing on [the] balloon,” he says. “Before that it had a looped velcro panel at the side of the balloon, but the whole balloon deflated. But now the air pushes it closed so it resets itself.”

The panels for the balloon are designed by CAD programs, doing stress analysis to make sure the fabric isn’t overstressed. Each gore of panels on the balloon has anywhere from 8-17 trapezoidal panels. Most companies are using AutoCAD or Rhino 3D computer programs for designing, he adds.

Interestingly enough, one area that’s still the same is the basket. “It was rattan then and rattan now,” he says. “They tried using fiberglass, aluminum composite materials, but they had it right the first time.”

A typical hot air balloon ride is one hour starting at either the first few hours at sunrise or the last few before sunset, and can range in height from treetop level to 3,000-5,000 feet. While a balloon goes relatively slowly, it’s possible for wind speed to take it to 120 mph. “Even then it can seem like you’re not even moving,” he says.

Richardson says the FAA wants a future designer to intern with a certified balloons instructor for 18 months to learn the entire process from start to finish before pursuing balloon building, a craft centuries in the making.

For Further Discussion
They tried using fiberglass, aluminum composite materials, but they had it right the first time.Andy Richardson, National Ballooning LTD