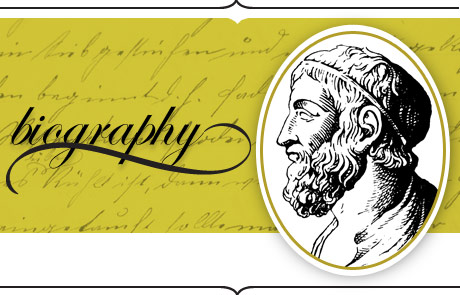 One of the greatest minds of classical antiquity, Archimedes (c. 287 BCE – c. 212 BCE) was a scholastic "triple-threat" who made astonishingly original contributions to mathematics, physics, and engineering. His c.v. includes some three dozen new tools and weapons systems as well as a pioneering role in plane and solid geometry. He even gave scientists and engineers their ultimate catch-phrase, "Eureka!"

With all that going for him, Archimedes was no doubt the ancient world's poster boy for science and technology careers, right? Wrong. His famous inventions brought water to arid lands and held invading Roman armies at bay, but he vocally disdained them. Compared to the conceptual rigors of his favorite academic pastime of geometry, engineering and other pursuits that addressed worldly necessities of living were to him "sordid and ignoble." His obsessive interest in mathematical abstractions came at the expense of personal hygiene and earned him a reputation as ancient Greece's first absent-minded professor. He is most widely known for running naked through the streets of Syracuse. One wonders how the man whose brilliant feats of engineering include the compound pulley and the theory of hydrostatics would fare in today's job market.

And so it is with Archimedes. With little in the written record to go on, most attempts to chronicle his life invariably comprise some mix of fable, fact, and fudge factor. Unlike his mathematical work, he left few formal treatises behind describing his inventions. Accounts of his life were written decades after his death, and leave plenty of room for uncertainty about his actual accomplishments and the true nature of his character.

His own writings disclose that he was born in Syracuse – then a self-governing city-state and the most important seaport on the Greek-controlled island of Sicily. His father was the astronomer Phidias, which could account for his natural bent toward the sciences and one of his primary later inventions, an early planetarium.

He spent formative years in Alexandria, Egypt – academic ground-zero during the Hellenic period – where he reportedly worked and studied with the successors of the great mathematician Euclid. It was Archimedes' passion for geometric abstractions that led to his disdain for engineering. Yet he is said to have invented his most lasting practical device – the Archimedes screw – while immersed in these lofty concepts in Egypt. Developed initially to irrigate croplands along the Nile delta, his water screw was also used to drain water from underground mines, to water the Hanging Gardens of Babylon and to pump bilge from the pharaoh's ships. Today it is standard issue in sewage treatment, irrigation, and other applications where it is vital to move large amounts of water with minimal effort.

During Archimedes' lifetime, his most famous inventions, and presumably the bulk of his income, came from his friendship with King Hieron II of Syracuse. Hieron marveled at his mastery and frequently put him to the test.

On one occasion, the king asked Archimedes how a great weight could be moved by a small force. The inventor proceeded to demonstrate how, with only a series of compound pulleys, he was able to singlehandedly drag a fully loaded three-mast ship out of the harbor and across the beach. The story of his famous bath, the discovery of the principles of hydrostatics, and the ensuing naked run through the streets is not universally believed, but it is indicative of the close connection between the king and his prize engineer.

Millennia before weapons of mass destruction, Archimedes used his unique understanding of mass to cause new levels of destruction with devastatingly ingenious weapons created for his king during the Second Punic War. He developed specialized catapults that hurled blocks of stone and logs at invading ships. He developed the Archimedes claw, a hidden crane with an enormous hook used to raise invading ships out of the water and either flip them upside down or allow them to crash back down into the surf, crashing them to bits. Less certain but no less impressive are the historical accounts of Archimedes' use of giant mirrors to incinerate enemy ships with reflected sunlight.

Despite having kept the invading Romans at bay for more than three years, eventually the island colonies on Sicily were sacked in 212 BCE. The Roman emperor had specifically asked that Archimedes be brought back alive, but Roman soldiers found him working on a math problem at his desk and tried to seize him. Mistaking his mathematical tools for exotic weapons, a soldier killed Archimedes on the spot.

Archimedes' true accomplishments may be shrouded in the mists of time, but his genius shines through loud and clear today.

With little in the written record to go on, most attempts to chronicle his life invariably comprise some mix of fable, fact, and fudge factor.