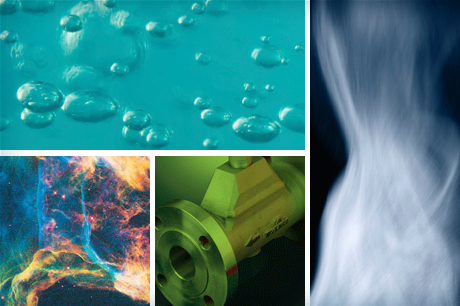 Vortex shedding is the process by which vortices of gas or liquid are formed around a solid object that obstructs the path of a gas or liquid stream. These “shed” vortices are carried downstream in the flow and are detected by vortex shedding and fluidic flow meters, which measure thevelocityof liquids and gases such as water,cryogenicliquids,boiler feed water,hydrocarbons, chemicals, air, nitrogen,industrial gases, and steam flowing through the pipe.

Although vortex shedding flowmeters have been available for decades, they are increasingly being used to measure industrial flow—partly because of the hydraulic improvements made over the years, especially changing the shape and/or mechanics of the shedder bar and its interaction with the sensing system.

“Some manufacturers have also developed insertion vortex shedding flowmeters that measure flow at one point in a pipe and use this measurement to infer the total flow in the entire pipe,” says Erik Rosaen, vice president of marketing for Universal Flow Meters. “Using an insertion flowmeter represents a viable economic alternative to installing an expensive full-bore flowmeter in a large pipe.”

Flowmeters are now made from tough exotic metals such as HastelloyTM, a range of highly corrosion-resistant metal alloys containing nickel, molybdenum, chromium, and other metallic elements.

“Some vortex shedding flowmeter manufacturers have taken this further by embedding pressure and temperature sensors into the flowmeter body,” adds Rosaen. “Some manufacturers have also added the functionality of a flow computer to the transmitter—effectively implementing a multi-variable vortex shedding flow measurement system that can calculate the mass flow of a gas.”

Rosaen indicates that many users don’t fully understand the Reynolds number (a dimensionless number that describes the flow characteristics of the fluid and is calculated using the flow rate, specific gravity, viscosity, and diameter), density constraints on low flow performance, and the need for back-pressure.

“People often (correctly) think of vortex shedders as flowmeters that measure fluid velocity,” he says. “However, vortex shedding flowmeters typically become non-linear at low Reynolds numbers and stop generating vortices (turn off) at an even lower Reynolds numbers. These Reynolds-number constraints can and do vary by actual manufacturer, model, and size. A subtlety in this regard is that a medium-viscosity liquid flowing at a given velocity might be measurable in a large flowmeter, but not in a small flowmeter of the same manufacture and design.”

In addition, gases operating at low pressure often do not have sufficient density to operate the sensing system at low flow conditions. Some liquids can also exhibit this problem. These phenomena can (and often do) raise the minimum operating velocity to be above that of the Reynolds number constraint. Not taking Reynolds number, density, and velocity into account can be catastrophic with regard to flowmeter performance in some applications.

Because vortex shedding flowmeters are ruggedly built they are often used in harsh or challenging conditions, such as measuring cooling water, gases, steam, and compressed air. One example that shows the durability and accuracy of vortex shedding flowmeters is measuring, monitoring, and communicating to a central location the amount of water that is added to a concrete truck at the pour site to achieve proper concrete consistency.

“This application may seem mundane, but the flowmeter must withstand rain, snow, sun, vibration, and still operate properly for years,” says Rosaen. “In addition to needing to be economical (one flowmeter installed on every truck), the flowmeter must not be damaged by air flowing at high velocity when the pipe is blown dry. Other flowmeter technologies can measure flow more accurately, but they are not likely to operate in these harsh conditions and maintain accuracy over time.”

Although vortex shedding flowmeters have been available for decades, they are increasingly being used to measure industrial flow.Erik Rosaen, vice president of marketing, Universal Flow Meters

Article
Energy Blog: Cooking With Gas and Electricity
Recent survey uncovers some of the kitchen energy use trends across the United States.

Article
Infographic: Gas Surge Due to Three Regions
The surge in U.S. gas production has led to a surplus large enough for the national to start exporting.