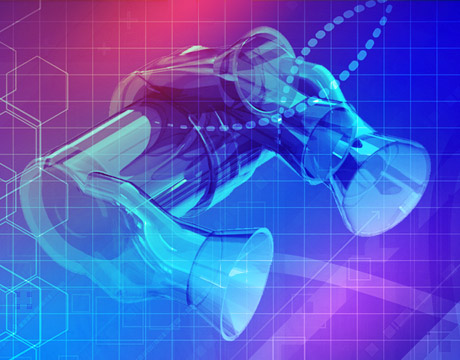 An Artificial Heart to Beat

Two pioneers in the quest for the holy grail of cardiovascular engineering – a practical, permanent artificial heart – are pumped about a new prototype heart now in preclinical testing. The experimental device, if successful, could be the first artificial heart sufficiently compact, durable, biocompatible, and inexpensive enough to serve as a permanent replacement for failing hearts.

The prototype is the latest creation of Richard Wampler, M.D., the brains behind groundbreaking blood pumps used in the ventricular assist devices (VADs) currently used to boost heart function. Wampler is the resident innovator at OregonHeart, a spin-off of Oregon Health & Science University (OHSU), Portland, OR, where he also holds a faculty position. Decades after completing a surgical residency at OHSU, the physician-engineer reconnected with a former mentor there, Albert Starr, M.D., who serves as a medical advisor to OHSU-owned OregonHeart. In the 1960s, Starr co-invented and successfully implanted the world’s first successful artificial human heart valve.

With inspiration from these long-time leaders, the engineers of OregonHeart are working to adapt Wampler’s patented shuttling pump design into a practical, versatile, and most of all permanent total artificial heart system (TAHS). Wampler’s concept would effectively enable one relatively small and lightweight pump to do the work of the two larger pumps current artificial hearts use to control circulation of blood between the heart, the lungs, and the rest of the body. The reduction in bulk and complexity would mean artificial hearts could be used in more types of patients with a wider range of conditions. The prototype is now in proof-of-concept testing in animals, and the company hopes to begin testing it in human patients within 10 years.

A total artificial heart is not a new idea. Engineers and physicians have been pursuing the idea in earnest since the 1940s, creating critical technologies like the heart-lung machine and the artificial heart valve along the way. In 1982, the Robert Jarvik-designed Jarvik 7 artificial heart was implanted in patient Barney Clark, who survived for nearly four months. Since then, artificial hearts have primarily been used for humanitarian purposes for the most severely ill patients or as a temporary treatment to keep a patient alive until a donor heart is found. Devices for long-term partial heart support such as pacemakers and left- or right-ventricular assist devices (LVADs and RVADs) are used as a bridge to transplantation.

The most widely used artificial heart system today is the SynCardia TAH-t temporary artificial heart from SynCardia Systems, Tucson, AZ, which has been implanted in more than 500 patients since 2012. The SynCardia device uses two separate positive displacement pumps to replace the patient’s right and left ventricles, with two valves on each pump maintaining the unidirectional flow of blood. Wampler’s design takes a different approach: it incorporates a rotary pump such as those commonly used in LVADs, which work with the patient’s heart to boost the function of the left ventricle.

With a track record for safety and durability, rotary blood pumps offer several advantages as a platform for a total artificial heart system. Wampler demonstrated these advantages in a landmark 1988 invention, the Hemopump, a device about the size of a pencil eraser that could be placed in the patient’s heart with a catheter in a 20-minute procedure. The Hemopump led to his co-development of today’s most widely used rotary LVAD system, the HeartMate II by Thoratec, Pleasanton, CA,a device used most famously to keep former U.S. Vice President Dick Cheney alive during his 20-month wait for a heart transplant. His current vision is to adapt the rotary pump approach in a smaller, simpler TAH system without the need for artificial valves, venting or volume compensation.

The prototype is intended to be implanted after the patient’s native heart has been removed. The pump housing’s four inflow/outflow ports are surgically connected with atrial cuffs and prosthetic arterial grafts to the patient’s left atrium, aorta, right atrium, and pulmonary artery. When in place, the heart produces blood circulation by means of a single rotary impeller mounted on a hollow shaft surrounded by electrical coils. These coils interact with motor rotor drivers within the shaft walls to produce both rotary and axial motion. As the impeller rotates it also shuttles along the shaft between the four arterial connectors in sequence, alternately drawing in or pumping out blood as required to create both pulmonary and systemic circulation. Flow and pressure measurements control the rotor’s duty cycle and dwell time to balance the flow between the two sides. This axial shuttling movement essentially enables a single blood pump to perform the work of two, eliminating much of the bulk and complexity of current two-pump TAH systems.

Wampler saystotal artificial heart technology has progressed much more slowly than the pace of advances in LVADS and other devices. But changes in U.S. health trends are lending renewed the urgency of need for an alternative to heart transplants for the long-term treatment of severe heart diseases like congestive heart failure.

Heart failure is lethally successful. It kills nearly 300,000 Americans a year and is on the rise as our population ages and obesity rates increase. Heart failure occurs when the heart is no longer able to pump enough blood to meet the body’s normal requirements. It can result from birth defects or from any other form of damage to the heart muscle. Cardiologists base treatments on the underlying cause as well as the patient’s age and overall physical condition. A half century of advances in biomedical engineering have led to a range of treatments for heart failure, from medication to VADS to transplantation.

For patients with severe bi-ventricular end-stage heart failure, a transplant is the treatment of last resort but there are never enough suitable hearts to meet the growing need. About 4,000 patients are currently on the United Network for Organ Sharing’s transplant waiting list, yet only about 2,000 donor hearts become available in a typical year. The perpetual scarcity of organs in the face of a growing demand adds urgency to the effort to develop a total, practical, and permanent artificial heart as an alternative destination therapy, said the company’s CEO Clyde Taylor. “This technology could be quite significant, especially with what’s gone on with the population and the negative trajectory on heart health.”