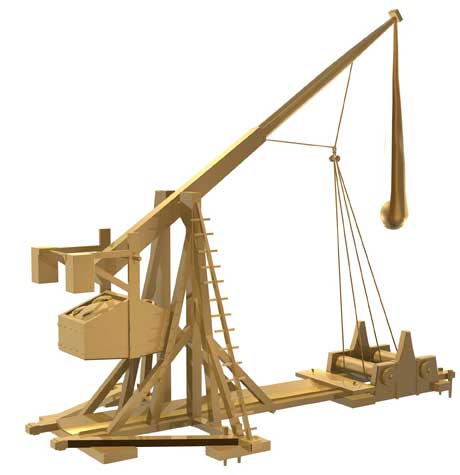 Thanks to a wealthy Englishman who started throwing small cars and grand pianos from his replica of an ancient military engine once used to hurl giant rocks, the trebuchet has made a comeback.

The Englishman, Hew Kennedy, built the 30-ton trebuchet, from which he has sent dead pigs and cows flying, at his home in Shropshire, England. “Why?” he was once asked by a reporter. "Why not?” he replied. “It's bloody good fun!"*

Since Kennedy launched his first projectile, interest in the trebuchet, one of Richard the Lionheart’s weapons of choice during the Crusades, has surged. Now, a Google search for the word trebuchet yields more than 8.3 million hits.

So, why the fascination with a war machine eclipsed by the invention of gunpowder in the 13th century?

For one thing, hurling everything from peas to pumpkins with trebuchets is downright fun. Witnessing the modern-day efficacy of an ancient weapon that figured so prominently—and gruesomely—in the annals of war is also a draw.

Many scholars believe that Chinese engineers designed a form of the trebuchet as early as the seventh century. But most of what we know about the device comes from medieval European history.

The trebuchet evolved from the traction trebuchet, a lesser incarnation that barely managed to propel a missile out of its sling, to the counterweight trebuchet used to brutal effect in many a battle. The counterweight—the component that separates a trebuchet from a catapult, which takes its power from potential energy in a twisted bundle of ropes or other sinews—unleashed the trebuchet’s full, deadly potential.

In wartime, prisoners or unwelcome emissaries who crossed enemy lines were often sent flying back to their ranks by the trebuchet’s throwing sling. Trebuchets ended many sieges, including King Edward I’s crippling assault on Stirling Castle in 1304, which the Scottish defenders quickly surrendered when they saw the colossal trebuchet the king’s forces had aimed at them. The ruthless king proceeded with the assault anyway, just to see how his weapon would perform. The trebuchet has also been used in germ warfare: Lithuanian attackers flung soldiers’ corpses and cartloads of manure into the castle at Carolstein in 1422.

In modern times, the trebuchet’s educational value has allowed its good to triumph over such prior evil. The U.S. Military Academy at West Point, South Dakota School of Mines and Technology, and Wright State University among other schools have used the trebuchet at recruiting events to attract students to its engineering and science programs. At these schools and many others students find designing and testing trebuchets an excellent way to learn mechanical engineering design and Newtonian mechanics.

Designing a trebuchet teaches them how the mass of the counterweight and the length of the throwing arm affect a projectile’s velocity and range. In making adjustments to the angle of launch, students see the physics of projectile motion in action. Through trial-and-error testing, those skilled in mathematics and analytical mechanics are also able to optimize a trebuchet for maximum hurls or aim for a specific target.

Since 1993, we at Weber State University have used the trebuchet to teach the fundamentals of mechanical engineering design and technology. Every fall semester, freshmen in the Introduction to Mechanical Engineering Technology work in teams to design, build, test, and document a model trebuchet capable of hurling a standard 6-ounce, 3.8-inch-diameter softball as far as possible.

The competition rules are simple: The trebuchet, in the cocked and ready-to-launch position, must fit within a cubical space measuring 24 inches on one side with a raised counterweight its sole power source (no springs, compressed gases, electromagnetic devices, allowed); there is no weight-limit on the counterweight or the trebuchet itself, and the throwing arm cannot be articulated. Any engineering materials may be used as long as they are safe.

The 2004 winner has a welded steel frame with a pair of bearings that support a horizontal steel shaft attached to a throwing arm made from an old composite hockey stick. A cloth-pouch sling hangs from the end of the throwing arm by a pair of heavy-duty strings. The counterweight consists of two freely swinging 50-pound blocks of steel.

We are proud of our trebuchet contest records but happy to throw down the gauntlet and open up the challenge to any other schools willing to follow Weber State University design constraints and rules. May the best trebuchet win! *(Editor’s note: quote taken from Engines of Our Ingenuity, No. 593 “A Modern Trebuchet” by John H. Lienhard)

[Adapted from “Really Throwing It” by Kirk D. Hagen, for Mechanical Engineering, December 2005.]

Since Kennedy launched his first projectile, interest in the trebuchet, one of Richard the Lionheart’s weapons of choice during the Crusades, has surged.