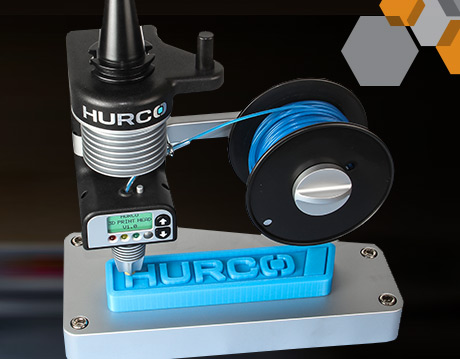 No matter how powerful, 3D printers can't print everything.

Though there are a number of technologies available for printing metal parts, there are also a number of exceptions. The compatibility of materials and machines can vary significantly, printers' build volumes are limited in size, and often 3D printers can't replicate the kind of precision needed for mission-critical parts that require milling and machining to finish the surface.

However, multi-machines that combine additive with other methods of manufacturing could turn out to be more cost-effective and efficient than conventional 3D printing.

Several companies in the additive manufacturing (AM) space have begun exploring ways to combine subtractive and additive technologies. Hurco, an Indianapolis, IN.,-based machine-tool company, has been experimenting with adding additive capabilities to its otherwise subtractive computer numerical control (CNC) technology. CNC machines use sophisticated computer models to control the speed and direction of a lathe, router, or other cutting tool mounted on a spindle, in order to shape complex parts out of a solid piece of metal or plastic.

Last year, Hurco announced its patent for an adapter to CNC machines, which effectively turns them into 3D printers.

The company wrote in a release that the adapter allows users to go from print to plastic prototype to finished metal part on one machine without repeated setups and without multiple prototyping utilizing costly metals and raw material.

“3D printing is very useful in the ability to rapidly produce a design, get it to a customer's hands, get some feedback from them, and then iterate again and again," Pavlakos says.

“You can produce a product that better fits your customers' needs, because you're able to iterate many more times, and still deliver a final product in a relatively short period of time."

Elsewhere, America Makes of Youngstown, OH.— one of the nation's leaders in AM and 3D-printing technology research—periodically issues project calls. Selected companies can receive Department of Defense funding for projects that advance the 3D printing industry.

Optomec, an Albuquerque, NM., supplier of AM systems, answered America Makes' 2014 project call with a proposed next-generation 3D printer. The company ended up winning the award for its idea of combining a traditional CNC machine tool with LENS, its powdered metal laser-based 3D-printing technology.

“We took the critical components of our system, which is our print head, our powder feeders, and our control software," says Tom McDonald, Optomec program manager for the project, “and we basically packaged it as a kit that we could take and put on any CNC machine tool."

"Many, many factories...have machine tools that are sitting there underutilized, where they could take an existing machine tool, add the capability to it, so they've got both deposition and machining on the same work cell," Richard Grylls, Optomec's general manager for LENS technology, said in a video release.

The company recently demonstrated the concept on an old CNC machine from the 1990s, purchased on eBay. “We basically stripped it out, put a new controller on it, added laser deposition capability—powder feeders, laser deposition head—and created a hybrid machine where we have both the ability to do conventional machining on a mill, and do laser deposition side-by-side," said Grylls.

Originally Optomec only planned to make the technology available as a retrofit to resurrect an old system, but the concept has grown to selling it as an accessory kit for a new CNC machine, McDonald says.

"They're getting into additive manufacturing much cheaper than buying a full system," Grylls said. "Only the market will tell in the coming months and years which direction it's going to go."

Holly Martin is an independent writer.

You can produce a product that better fits your customers' needs, because you're able to iterate many more times, and still deliver a final product in a relatively short period of timeElias Pavlakos, Hurco