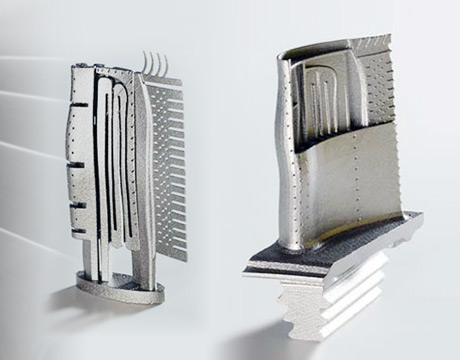 It took TURBOCAM Energy Solutions years of watching from the sidelines as aerospace giants like GE pioneered the use of 3D printing before going out on a limb itself.

And then when the New England-based manufacturer of high-precision flowpath components for aerospace, oil and gas, and diesel engine applications went out on that limb in 2013, it did so without a safety net—quoting its first additive manufacturing (AM) job before it even owned a 3D printer.

“You could see that the [AM] technology was being developed and getting closer and closer to achieving the requirements our customers have," says Jonathan Bicknell, TURBOCAM's general manager.

That same year, the company went through a deeply detailed comparison of additive technologies with its own core technology, five-axis machining.

"Traditionally, you'd buy a big piece of material, you would ship it from source, you would hog the material out, or machine a lot of chips...and get your final shape," Bicknell says.

In contrast to this subtractive form of manufacturing, direct-metal laser sintering (DMLS) is an additive process that uses lasers to heat and bond powdered metal, building up a part layer by layer.

The company took its time, but once the decision was made to venture into additive, everything happened fast.

“We received the machine one week, we got set up and trained the next week, and we started the project the third week," Bicknell says.

“We had an order for a number of pieces and we actually started building parts," he continues.

“For that first piece, there was a lot of nonrecurrent engineering involved, just to build and see the response. So you figure the first piece took 10 times longer than the rest."

Because they bided their time before launching into additive, and chose a manufacturer that had hundreds of DMLS printers under its belt, TURBOCAM avoided a lot of headaches.

“A lot of known lessons got passed on to us," Bicknell says. “Now we're going to take that learning and apply it to a whole different application."

After successfully printing a few parts, the company was asked to produce something a little more challenging by the Notre Dame Turbomachinery Laboratory.

“I had some complex instrumentation needs where I needed to get a lot of pressure measurements on a small airfoil, and it wasn't going to be practical to do those in a conventional way," says Joshua Cameron, head of the laboratory. “There were too many and they were too small to fit into the vane."

But with DMLS, TURBOCAM was able to build trenches, or tunnels, within the part that allowed the researchers to add dozens of pressure flux sensors at precise locations without disrupting the flow.

In addition to integrated sensors, they were also able to create very small diameter tunnels through the middle of the part, normal to the flow, which allows static pressure to fill the cavity so measurements can be taken from outside the part.

“The reality is that if you were to take a conventional product, and decide that you would build it additively, the cost is actually too high for the majority of our parts. But if you work with your customer and design it with an additive mindset, you can start to reduce cycle time and overall cost," Bicknell says.

Once you've printed a part with DMLS, that doesn't mean it's ready to ship right off the presses.

“It starts with additive, to create the internal cavities," Cameron says. “But then there's additional processes, like polishing the cavities, and finish five-axis machining on the airfoil surfaces."

“Typically folks will think, 'I have a 3D printer, now I can print anything I want,'" Bicknell says. “We had our eyes open, and we knew that the tolerances are so tight, not to expect that on certain parts."

With their five-axis expertise, TURBOCAM is able to inspect a 3D-printed part, readjust the CAD model, and then create programs to subtractively machine the final shape to its exact specifications.

AM has helped TURBOCAM diversify its offerings to customers like Notre Dame.

“We've been able to provide components they've never tested in their rig before, in a timely manner, and add special instrumented components," Bicknell says. “They can get more information from that test for their customer, because we offered an additive approach."

In addition to expanding the design possibilities, DMLS now allows TURBOCAM to work with high-temperature trademarked materials Inconel and Hastelloy, along with aluminum and more traditional alloys.

Notre Dame has done three different DMLS parts with TURBOCAM and is now in discussions for the next project.

“It would have been impossible to build these cooled vanes with a conventional machining method," Notre Dame's Cameron says.

"You would have had to have used some sort of investment-casting process, and that process is very time consuming, very long-lead, and very expensive. So I think [the cost] is completely reasonable for what you're getting, and I do think it's coming down as TURBOCAM learns how to optimize the process."